Body camera video released Monday afternoon by Fort Worth police shows the moments leading up to an officer-involved shooting that left a carjacking suspect dead.

FORT WORTH, Texas - Body camera video released Monday afternoon by Fort Worth police shows the moments leading up to an officer-involved shooting that left a carjacking suspect dead.

The video is only several seconds long, but police say you can clearly see the suspect holding a handgun and firing at the responding officer.

It was just seven seconds from the time the officer exited his vehicle to what police say was an exchange of gunfire. A carjacking suspect was shot and killed on Race Street Sunday around 1: 34 p.m. in northeast Fort Worth.

"We want the community to know we are committed to completing a thorough investigation of this police incident," said Fort Worth Police Chief Neil Noakes.

Noakes says there were several calls to 911 reporting a man trying to carjack people. The first responding officer located the suspect. 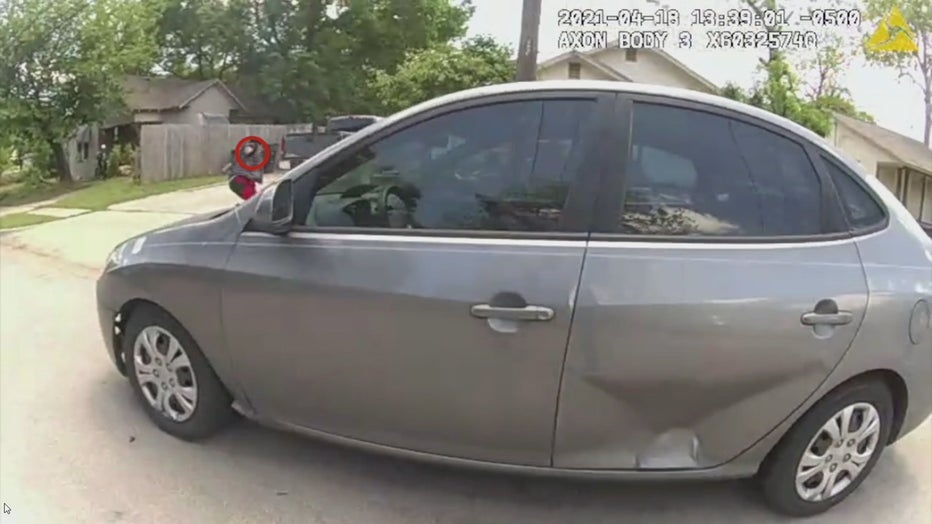 "A tragic situation, any way you look at it. A life was lost. The details of the call said a Black male with a black jacket, black shirt, black sweatpants with a red stripe was trying to steal a truck using force," Noakes said. "He was still on foot running westbound on Race. The officer approached in his vehicle and pulled slightly ahead. As he stopped his vehicle, the suspect turned and ran the other direction."

That’s where the body camera clip picks up.

Chief Noakes walked through a slowed-down version of the video. He says the officer noticed a weapon and gave commands to drop it, but the commands were ignored.  A red circle in the video highlights the suspect's gun pointing at the officer who then responds with deadly force.

"It is believed the officer fired a total of six shots," the chief said. "And at this point, we believe the suspect fired at least one shot, but it needs to be corroborated with evidence analysis."

For now, police declined to release the suspect’s name pending notification of his relatives.

Noakes says more details will be forthcoming. But until then, they’d like the community’s help piecing together the clearest possible picture of what unfolded.

"If anyone has video, it’s absolutely critical we talk to you to see what kind of video you have and what kind of evidentiary value it has," he said.

Chief Noakes says the officer has been with the department for four years and is on administrative leave while the major case unit and internal affairs handle the investigation.

"Our police officers run toward the threat," he said. "I mean this officer acted with extraordinary heroism whenever he went out there."

The department says there were no reports of the man having a gun during the attempted carjackings. The department revealed clips of the body camera footage that it says shows smoke from the barrel of the suspect’s gun. It says evidence on scene further suggests the suspect fired the gun.