City leaders pointed to several recent shootings, including one that killed a Polytechnic High School student earlier this year, adding to the urgency of speaking directly to students about making smart choices.

FORT WORTH, Texas - Fort Worth city leaders, police and activist groups are going on school campuses with a message about gun violence.

Speakers shared their personal experiences of losing someone to gun violence directly with students.

City leaders pointed to several recent shootings, including one that killed a Polytechnic High School student earlier this year, adding to the urgency of speaking directly to students about making smart choices.

Melinda Hamilton has been traveling throughout the country, sharing her family’s story through the non-profit Mothers of Murdered Angels after her daughter and her grandson were killed in separate shootings. 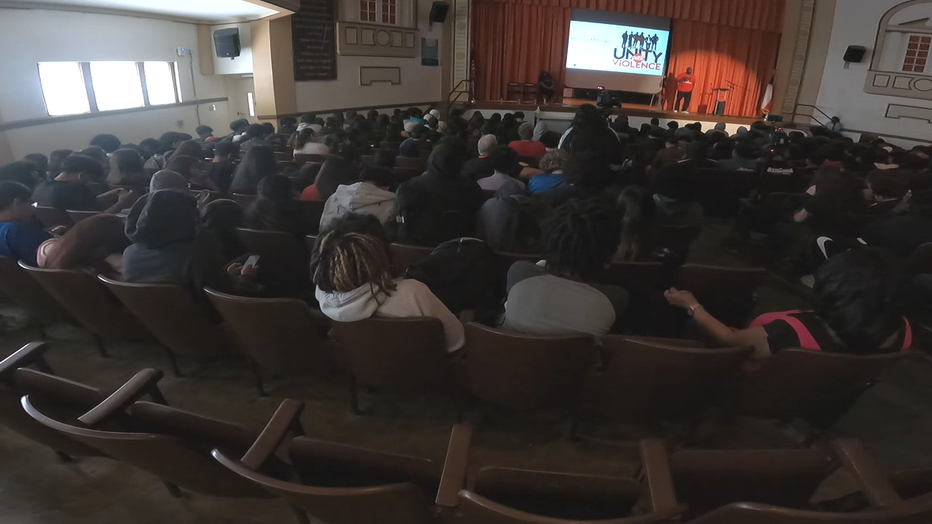 "They were all out just having fun. Some people came down the street and just started shooting," she said.

Melinda’s daughter, Shemeka Hamilton Rodriguez, was killed in a mass shooting where seven people were shot in a Morningside neighborhood in June 2017. Two died, including Shemeka.

Three years later, Melinda says her grandson, Derrick Johnson Jr., was on his way home when he was shot and killed.

"I’ve been speaking on it because it’s needed," she said. "These kids are killing each other."

Melinda spoke at Polytechnic High School Tuesday morning as part of the new Fort Worth Violence Intervention spearheaded by District 8 Councilman Chris Nettles. He pointed to a recent violent weekend in Fort Worth and surrounding areas in late April. In one of the shootings at an after-prom party on Altamesa Boulevard, a 17-year-old was killed.

Nettles says he and his staff immediately started contacting local anti-gun violence organizations and school principals to see if they could speak directly to students before summer break, which typically sees a spike in violence.

Organizations like Melinda’s as well as funeral homes and Fort Worth police are invited to speak with middle and high school students on how shooting deaths affect different aspects of life, hoping to make an impact on even one life.

The program will be in at least three more schools before the end of the school year.

City officials say they plan to expand on that next school year.