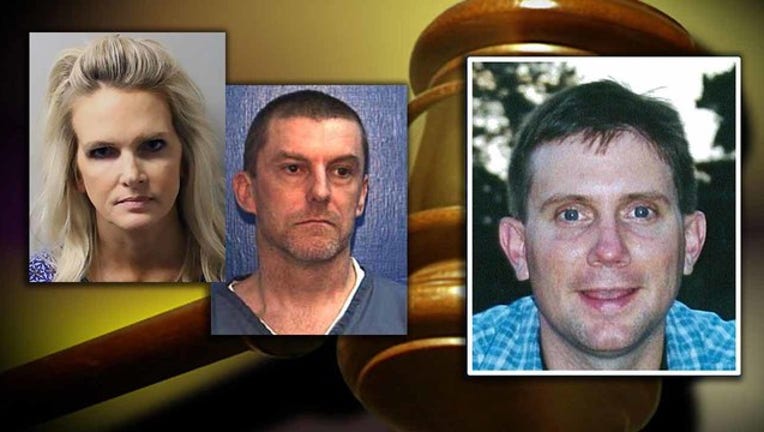 TALLAHASSEE, Fla. (AP) - With a plot that echoes a well-known Hollywood masterpiece, a trial began Tuesday for a Florida woman accused of helping orchestrate the death of her husband in order to secure a massive insurance payout.

Prosecutors contended that Denise Williams planned the December 2000 slaying of her husband with a man that she was having an affair with and later married. On a cold morning in north Florida, Mike Williams disappeared while duck hunting on a large lake near Tallahassee, and initially it was believed that he had fallen from his boat and that his body had been devoured by alligators. His disappearance triggered a massive search by local and state authorities.

It was revealed years later that Williams had died from a shotgun blast to the head and had been buried near a lake. The man who shot him was his best friend and insurance agent Brian Winchester, who confessed last year to the killing. At the time of his death Williams had three life insurance policies worth $1.75 million.

Williams is charged with first-degree murder, conspiracy to commit murder and accessory after the fact in her husband's killing.

Without a body, Denise Williams petitioned to have him declared dead due to accidental drowning. She married Winchester in December 2005, but the relationship soured and they divorced in 2016.

Last year, Winchester pleaded no contest to kidnapping his ex-wife at gunpoint, and was sentenced to 20 years in prison. The very next day, authorities announced that Mike Williams' remains were found at the end of a dead-end road after they received "new information." The body had been discovered two months earlier, but the state's Department of Law Enforcement needed to confirm through DNA tests that it was actually Mike Williams.

Philip Padovano, one of the attorneys representing Denise Williams, asserted to jurors on Tuesday that there is no proof his client was having an affair with Winchester or had helped plot the killing.

"There's no tangible evidence or physical evidence to connect Denise Williams to this crime," Padovano said. "No confession, no admission, nothing."

He told them that Winchester has been given immunity from murder charges in exchange for his testimony and that he was given a lighter sentence in his kidnapping case. In order to find Williams guilty, Padovano told the jury that "you will have to rely on the word of a murderer and a convicted felon."

Winchester is expected to eventually testify in the case. Prosecutors also have said they plan to call Winchester's first wife, who they said had a tryst with both Denise Williams and Winchester in Panama City just months before the killing of Mike Williams.