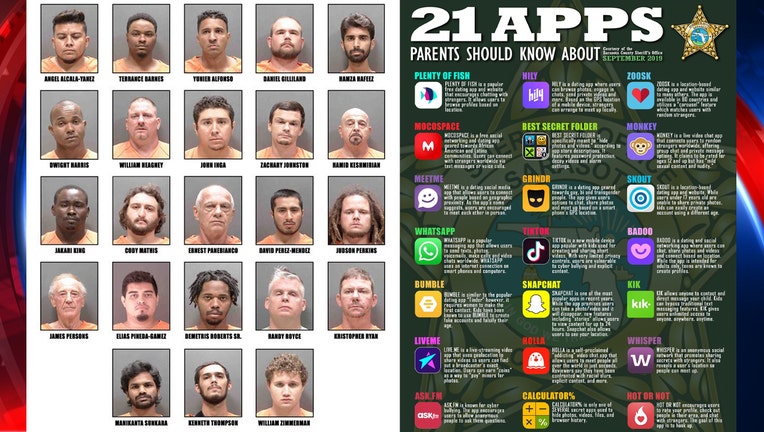 According to the Sarasota County Sheriff's Office, the suspects ranged in age from 21 to 77, using apps and social media sites to engage in sexually explicit conversations with undercover investigators they believed were children.

Over the course of four days, the sheriff's office said "Operation Intercept VII" caught the men going into a Sarasota home, believing they would have sex with a young boy or girl. Several men brought condoms, one brought candy, and another brought a sex toy.

One of the suspects was visiting Florida from Oklahoma, and drove from Lakeland to Sarasota, believing he would be meeting a 14-year-old child. Another had child pornography on his phone and had sent over 90 explicit photos of himself to who he believed was a 14-year-old child.

“I wish I could say these operations were no longer needed but time and time again, even after we make dozens of arrests, these men keep coming back for more,” said Sarasota Sheriff Tom Knight. "In this digital world we live in, innocent children are far too accessible to predators. That is why, as parents, we have to get serious about prevention. Parents are the first line of defense and we will never stop reminding our community of that.”

The sheriff's office had previously released a list of 15 apps parents should watch out for, noting the apps can be used by predators targeting children. Following the latest series of arrests, investigators updated the list to include six additional apps.

These are the apps investigators are warning parents to watch out for:

- Plenty of Fish: This is a free dating app and website that allows users to browse profiles based on location. It encourages chatting with strangers, investigators said.

- Hily: It is a dating app where users can browse photos, engage in chats and send private videos. Strangers can arrange to meet up locally based on the GPS location of a mobile device.

- Zoosk: This is a location-based dating app and website that matches users with random strangers with a "carousel" feature.

- Mocospace: It is a free social networking and dating app geared toward African American and Latino communities. Users can connect with strangers worldwide through text messages and voice calls.

- Monkey: It is a live video chat app that connects users to random strangers worldwide, offering group chat and private message options. It claims to be rated for ages 12 and up but has "mild sexual content and nudity."

- Meetme: It's a dating social media app that allows users to connect with people based on geographic proximity. The app's users are encouraged to meet each other in person.

- Grindr: This dating app is geared toward gay, bi and transgender people. It gives users options to chat, share photos and meet up based on a smart phone's GPS.

- Skout: It's a location-based dating app. While users under 17 years old are unable to share private photos, kids can easily create an account with an older age.

- Whatsapp: This is a popular messaging app that allows users to send texts, photos, voicemails, as well as make calls and video chats.

- Tiktok: It's a new app popular with kids that's used for creating and sharing short videos. With very limited privacy controls, users are vulnerable to cyber-bullying and explicit content.

- Badoo: This is a dating and social networking app where users can chat, share photos and videos based on location. The app is intended for adults only, but teens are known to create profiles.

- Bumble: It's similar to the popular dating app, Tinder, however, it requires women to make the first contact. Kids have been known to use Bumble to create fake accounts and falsify their age.

- Snapchat: It's one of the most popular apps of 2018. While the app promises users can send a photo or video and it will disappear, recent features allow users to view content for up to 24 hours. Snapchat also allows users to see your location.

- LiveMe: This live-streaming video app uses geolocation to share videos so users can find out a broadcaster's exact location. Users can earn coins within the app and use them as a way to pay minors for photos.

- Holla: The app's makers admit it's an "addicting" video chat app. It allows users to meet people all over the world in just seconds. Reviewers say they have been confronted with racial slurs, explicit content, and more.

- Whisper: This is an anonymous social network that promotes sharing secrets with strangers. It also reveals a user's location so people can meet up.

- Ask.fm: This app has become known for cyberbullying. The app encourages users to allow people to anonymously ask them questions.

- Calculator%: This is one of several secret apps used to hide photos, videos, files, and browser history.

- Hot or Not: This app encourages users to rate other users' profiles, with the focus on physical appearance. It also allows users to check out people in their area and chat with strangers. The sheriff says the goal of this app is to "hook up."