DALLAS - Dallas Mayor Eric Johnson met with other leaders on Wednesday to discuss what to do with money donated to tornado victims as the first business in a damaged shopping center has reopened.

It’s been more than three months since strong winds damaged homes, schools and businesses along Preston Road, but things were busy Wednesday inside Nothing Bundt Cakes at the Preston Oaks Shopping Center.

“I zipped in here and spent some money and bought some bundt cakes,” said Mark Hamilton. “This is my second time today, these are going to the hospital.”

It’s because customers recently found out the store, located at the southeast corner of Preston and Royal, is back open after being closed due to the tornado.

“It was a rare occasion that this happened and it’s the least thing that is on your mind that a tornado would go through your bakery,” said store lead operator Ashley Rios.

She said they opened just in time for their business day of the year -- Valentine's Day. 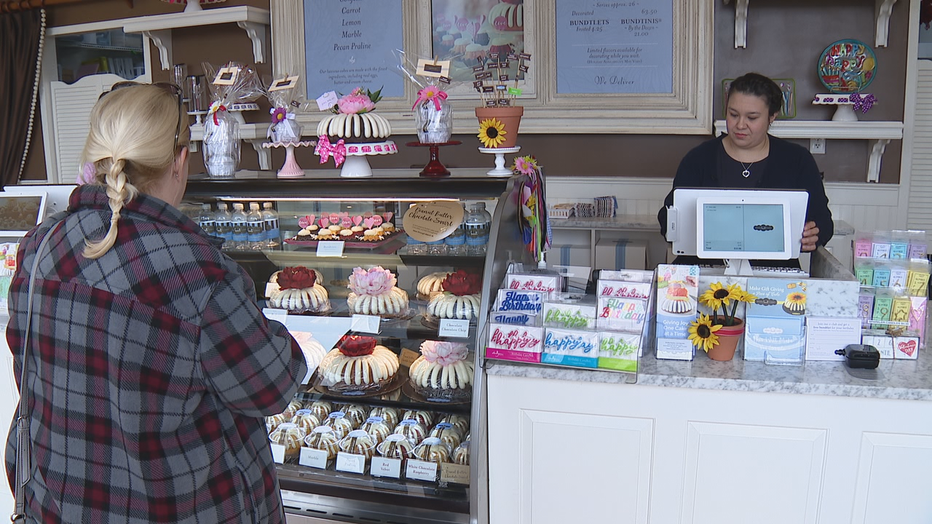 But while things are up and running at the store, that is not the case just steps away. Many homes are still damaged and most businesses damaged have not re-opened.

For the first time on Wednesday, a committee of community leaders and Johnson met to discuss how to spend donated money from the storm.

“The Dallas Foundation hosts the fund and we have raised about $50,000. People contributed because they want to help tornado recovery efforts,” said mayoral spokesman Tristan Hallman. “They discussed if we should spend $50,000 on infrastructure or on helping people. In both cases, $50,000 is not a ton of money, so you have to be surgical and see which cause that fund will serve.”

Johnson recently met with FEMA leaders amid calls by the governor, lawmakers and the mayor himself to have president trump sign an emergency declaration. It would open up more available funds to help businesses and homeowners.

“There is another fund that was set up after Hurricane Katrina that still has, to the magnitude of hundreds of thousands of dollars in it, that can be spent, but only be spent if we get a federal disaster declaration. That is the contingent of the fund, so once we get that, there may be other possibilities open,” Hallman said.

While the city waits on the disaster declaration, Rios is hoping their store will be the first of many to have an open sign outside their business.

“We want to kick-start the rebuilding of this community. We want to show after tragedy, there is life after,” Rios said.