Four buses filled with 15- to 17-year-old boys rolled into downtown Dallas around 10 p.m.

The convention center has been converted into an emergency intake facility, where the federal government and local charities will provide care for the undocumented minors. They could stay there up to 90 days.

All of the teens will be screened for COVID-19.

The U.S. Department of Health and Human Services said the goal is get the migrant teens processed and placed with a relative or suitable sponsor as quickly as possible.

They would remain in that person's care through their immigration proceedings.

Gov. Greg Abbott was in Dallas on Wednesday to explain his ongoing concerns with the recent surge at the border. He claims the Biden administration's relaxed immigration policies are inviting people from Central America - particularly children and teens - to make the dangerous trip north to the U.S.-Mexico border. 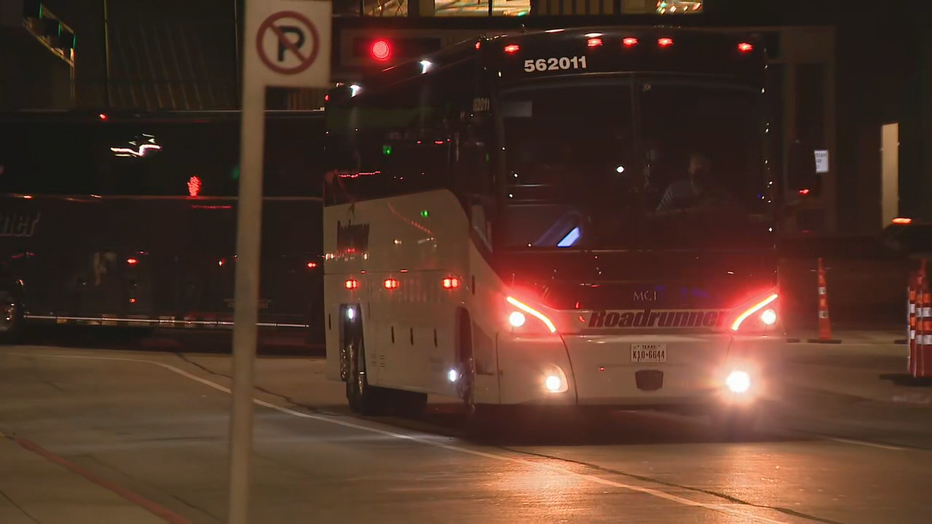 The Biden administration is following a court ruling from last year that prevents the government from turning back unaccompanied minors at the border. So many are showing up they cannot be held at border facilities.

"I'm a mother, and just to see these kids and to imagine the heart-wrenching decision that the parents had to make to send their children up toward the border because the conditions of where they are at currently must be so horrible… as a parent that you had to make that decision," Yolanda Bluehorse, Indigenous Cultures Program Dir., Memnosyne Institute.

Some groups and leaders are criticizing Abbott's stance on the current migrant surge.

Dallas County Judge Clay Jenkins did not mention the governor by name, but said the situation is being politicized to distract from problems with vaccine supply and the state's power grid.

Volunteers from Dallas-based nonprofits, like Catholic Charities and Faith Forward, will assist federal workers in operating the temporary shelters.

Organizations likes LULAC will help the teens get legal representation.

The convention center has been converted into an emergency intake facility, where the federal government and local charities will provide care for the undocumented minors.

"When someone is in need we don't turn the other way," said Rabbi Andrew Paly, who is the chair of Faith Forward Dallas.

His organization is working alongside other faith-based groups to assist the teens get processed.

"The information is still coming out as to what the needs will be. Catholic Charities is spearheading the effort in garnering the volunteers. Those who are bilingual, of course, would be helpful," Paley said.

According to the federal Health and Human Services Administration for Children and Families, the site will provide a place for the teens to eat and sleep until they can be placed in the temporary care of a family member or suitable sponsor as they await an asylum hearing.

The children will receive medical care and also undergo a COVID-19 health screening, part of a list of demands Gov. Abbott made during a news conference in Dallas Wednesday.

If allowed access, advocates with Traffic 911 would assist DPS troopers with those interviews.

"Have access to services, are able to receive trauma informed care, and are able to connect with the safe and healthy relationships they need to heal and thrive," said Cristy Lopez, with Traffic 911.

"The primary concern for us, at this point, is to help these kids through a difficult process," Paly added.

Catholic Charities Dallas is accepting applications for volunteers on their website. They're in need of people who can speak Spanish.

As federal, state and local officials work to deal with the children already here, there are still children arriving at the border every day.

At the White House press briefing Thursday, reporters pressed the administration on whether a newly announced plan to send 2.5 million Astrazeneca vaccine doses to Mexico hinged on Mexico doing more to help with the crisis.

Mexico did announce Thursday new travel restrictions across its southern border with Guatemala and Belize. Mexico says it’s to stop the spread of COVID-19, although it’s unclear why it’s taking such a step now.

You’ll notice there’s no video or images inside showing the sort of conditions these children are housed in. The White House says that’s due to both pandemic and privacy concerns. However, it says it’s working on getting media access to allow for some transparency regarding living conditions.