The man police shot has not been identified, and there are still many questions about what happened before the shooting. Police have still not released his name but say the children in the house where he allegedly entered with a shotgun are all safe.

FORT WORTH, Texas - Home surveillance footage captured the aftermath of a police shooting in a Fort Worth neighborhood.

Police are expected to give more information about what happened Friday morning.

The man police shot has not been identified, and there are still many questions about what happened before the shooting.

No officers were injured, but the suspect was taken to the hospital in critical condition.

Police have still not released his name but say the children in the house where he allegedly entered with a shotgun are all safe. 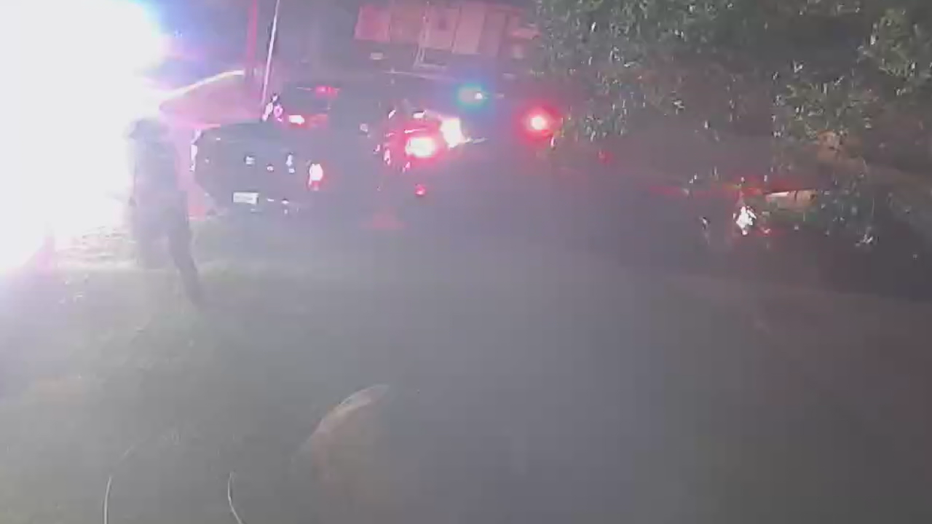 FWPD: Officers shoot man who tried to take kids from Fort Worth home

A crash and shots fired on the corner of Olive Place and Garland Avenue in Fort Worth on Wednesday night. It was enough commotion to activate a motion-detecting home surveillance video.

Joanna Herrera lives across the street and gave FOX 4 her surveillance video. She asked that FOX 4 only show part of her face on camera.

"I heard gunshots, and the first thing that I did was tell everybody to get on the ground," she said.

The surveillance camera started rolling at 9:07 p.m. right when shots were fired, so it’s unclear what happened before that.

Police remain tight-lipped, only saying there was a "collision" and a "deadly force situation" for officers.

But Herrera says her father was at the window and watched the dark-colored truck driving on Garland Avenue moments before it crashed.

"He turned and hit one of our cars, and then we just heard gunshots," she said.

Just five seconds after the final shot heard in the video, you can see the pickup truck move forward and hit a Fort Worth police unit.

Fort Worth police say they got a call about 30 minutes earlier about a man armed with a shotgun who had entered a home and attempted to take children inside.

Sgt. Amy Heise says he was unsuccessful and left the home, but police were concerned he might return.

"In order to take proactive measures, officers decided to block the streets to the north and the south to stop his attempts from gaining access to the house and hurting people," she said.

And police say he did return minutes later.

"He attempted to circumvent our police vehicles to gain access to the residence," Heise said. "And in the course of doing so, a vehicle collision occurred. And he presented our officers with a deadly force situation."

It’s unclear whether or not that deadly force was the shotgun that police recovered at the scene or the truck itself."

Police say officers shot the still-unidentified suspect while he was still inside of his vehicle.

"When they pulled him out of the car, they were doing like chest compressions for a good while," Herrera said. "And when they left with him, it was like with an IV."

Police say the suspect was taken to a hospital in critical condition. It’s unclear if his condition improved.

It’s also unclear whether or not he lived in the home, but police say he was involved in a romantic relationship with someone who lived in the house.

"They’re a good family We know them personally," Herrera said. "But I’ve never experienced anything like that at all. This is kind of a shock. Surprising for us."