FEMA employees are expected to tour tornado-affected areas next week. City and county leaders are still hoping to find some kind of federal funding for victims.

DALLAS - Roads remain closed in parts of Dallas and some are still without power five days after an EF-3 tornado tore through the city.

Cleanup efforts continued on Friday, despite the cold and wet weather outside.

FEMA employees are expected to tour tornado-affected areas next week. City and county leaders are still hoping to find some kind of federal funding for victims.

Over the past few days, roads that were once inaccessible are clearing up, and power for most of the people affected by Sunday’s tornado is back. But there are some who are still in the dark, hoping things will get better for them soon.

Meanwhile, city and county leaders are working to bring in federal aid for some tornado victims. 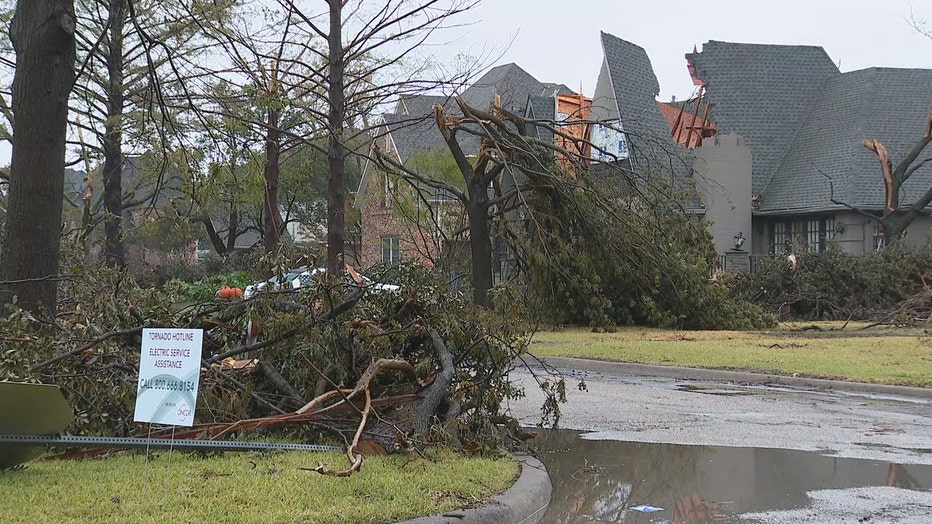 After Sunday’s storms, there were days of sunshine, but Friday was cold, dreary and wet.

Charlotte Barto lives on Brookshire Drive. She is one of a handful of Oncor customers who remained without power on Friday.

“Our power box was mangled by the storm so it had to be rebuilt,” she said. “I think with the rain and cooler temperatures, it’s been a little depressing. Today has been hard.”

Lee Sellers works for Big Tex Tree Service out of Houston. They’re volunteering their time and their services.

“When we had Harvey come through, I didn’t want that stuff piled up,” Sellers said. “So we are trying to get these people back to normal as fast as possible.”

Democratic Congresswoman Eddie Bernice Johnson, Dallas County Judge Clay Jenkins and city and county leaders on Friday toured some of the businesses damaged by the tornado, including the Home Depot on 75 and Forest and the Central Market on Preston and Royal.

“This is a can-do city, and now it is time for us to can do,” Johnson said. “I am hoping many see it, and we all come together and be supportive.”

They say employees with FEMA will tour tornado-affected areas next week. The hope is to bring some assistance, especially to small businesses that lost everything.

“We are going to have FEMA on the ground Monday in Richardson and Tuesday in Dallas to do whatever we can to get those small business loans,” Jenkins said.