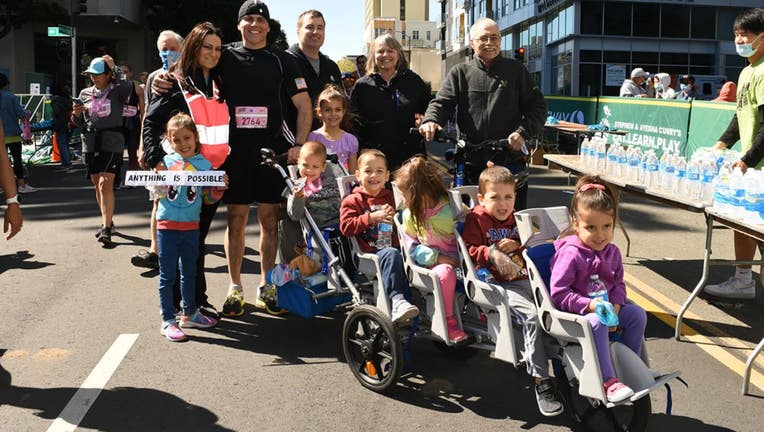 OAKLAND, Ca. - A father of seven recently ran a record-breaking half marathon — all while pushing his quintuplets in a stroller.

Last month, Chad Kempel crossed the finish line at the Oakland Running Festivals’ half marathon in California in two hours and 19 minutes.

And now, it’s official: the father has won a Guinness World Record for his achievement.

The 40-year-old father was among the thousands of runners who took part in the event, which returned to in-person races for the first time since 2019.

But what is more impressive is that Kempel broke the record while pushing his five 4-year-olds during the race — or an additional 240 pounds.

A U.K. doctor decided to run 22 miles while wearing a mask to help reassure anyone who has seen misinformation on social media claiming masks drop oxygen levels, that for the most part, it's simply not true.

According to FOX News, the runner said he carried a sign reading "Anything is Possible" to remind himself he could achieve his goal and make it past the finish line.

"While I'm out there, I'm thinking about what the kids went through when Amy was pregnant with them, and then and what Amy went through. And it really showed me that anything is possible," Kempel told local news outlet KTVU.

His wife, Amy, rode a bicycle alongside him and the kids, so she could be on hand to help with the children if needed. His toddlers also enjoyed the ride and occasionally told him to run faster, FOX reported.

He tried to break the record in 2019 with his then-one-year-old quintuplets. But, with a time of 4:49:29, he missed breaking a record by minutes, as Guinness had set the cut-off time for crossing the finish line at 4:45:00.

But this will still be the third Guinness World Record the accomplished runner has set with his quintuplets.

In 2019, he and his stroller-bound quintuplets finished a full marathon in five hours and 31 minutes. But Kempel kept running until he reached 27.3 miles, which signified the 27 weeks and 3 days his wife carried their quintuplets.

Guinness said it planned to display the family's stroller in one of its U.S. museums.

FOX News and FOX San Francisco contributed to this story.