It was a big night for football at Longhorn Stadium in Cedar Hill on Thursday. The DeSoto Eagles were in town to take on the Longhorns

CEDAR HILL, Texas - It was a big night for football at Longhorn Stadium in Cedar Hill on Thursday. The DeSoto Eagles were in town to take on the Longhorns.

Fans took their blankets and piled on the layers to keep warm. There were even hand warmers for sale at the stadium for $3 a piece.

“Good vibes only,” said fan Dezara Brown. “That’s the only problem. It is really, really cold out here.”

Temperatures dipped into the low 40s during the Desoto Eagles/ Cedar Hill Longhorns matchup. It’s known as the Battle of Beltline. The wind chill made it feel like it was in the 20s. The turnout was a testament to how much Texans love football -- and will bundle up for a rivalry.

“Yeah, I’m cold,” admitted fan Anaya Parkman. “This the only game I come to every year. I don’t go to other games but this one.”

Hot hands were sold with hot chocolate as fans in the stands weigh just how dedicated they are since they were willing to sit and cheer and freeze.

Saudia Harper and her son, Rodrick, say cheering on the Cedar Hill Longhorns is just that important. 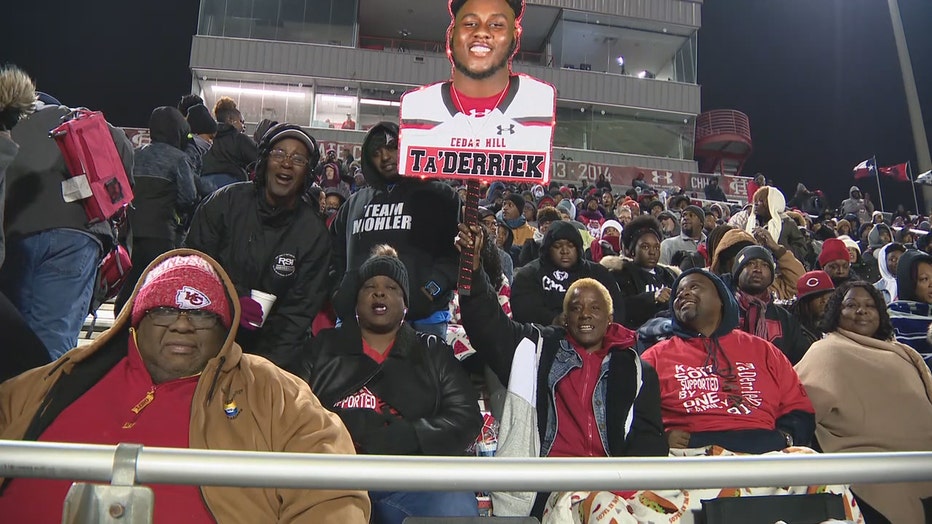 And on Cedar Hill senior night, some are here for reasons far more important.

“It’s been a long time coming,” she said. “So glad to see her make it to graduation.”

It was a cold night to celebrate. But to Rodrick, what’s more important was football.