A month after his death, Leo David Pantalion would have graduated from Benbrook High School, and his family is at the graduation ceremony to mark the occasion on his behalf.

FORT WORTH, Texas - It’s been one month since Leo David Pantalion was killed near his Fort Worth home.

The Tarrant County Sheriff’s Office is still investigating, but no arrests have been made yet.

On Friday, 18-year-old Leo David Pantalion would have graduated from Benbrook High School, and his family is at the graduation ceremony to mark the occasion on his behalf.

Born just six months apart, Miguel Arguello and Pantalion were not just cousins, but the best of friends from the beginning.

Everything they did, they did together.

"Yeah, it was an amazing bond," Arguello said.

And on Graduation Day, that bond lives on.

The 17-year-old prepared to take the stage at Herman Clark Stadium and accept his cousin’s diploma exactly one month after his death.

The Benbrook High School senior was found on May 17, just after 3 a.m., in the street outside of his home with severe wounds to his head. 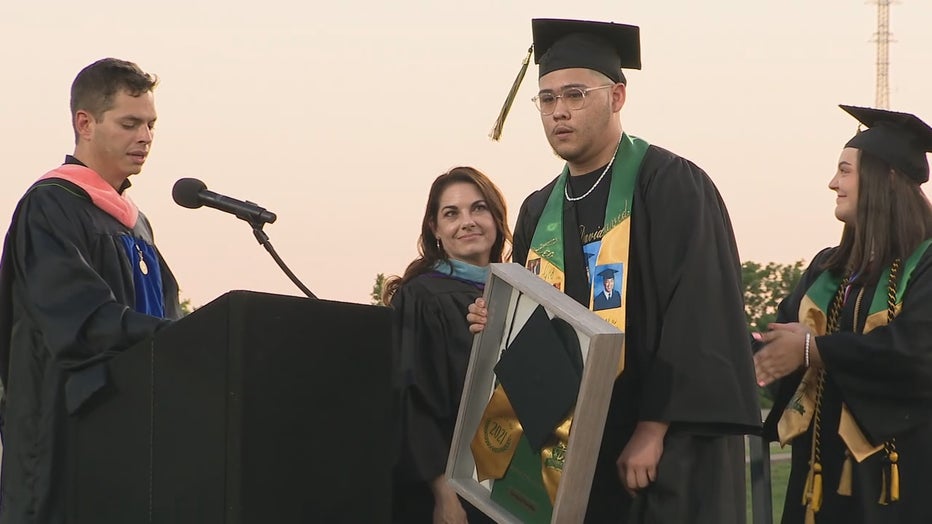 "Somebody’s got to know something. I’m sure somebody knows what happened to my son," Pantalion’s mother, Nelly Ramirez, said.

Pantalion’s family believes he was attacked by a group of people.

There have been no arrests and no suspects identified.

The Tarrant County Sheriff's Office is investigating, but has released little information about the progress of the case.

The medical examiner ruled Pantalion’s death a homicide, caused by a crushing blow to the head.

His mother is left with an unimaginable void and no answers about how her son died.

"[He was] just very happy all of the time and he had a lot of plans in life. Had a lot of goals," she said. "He wanted to do real estate and invest money.

The family home is now decorated in a string of mementos, each one keeping David’s memory alive.

Those memories are on Arguello’s mind as he takes this next step for both them.

"I just want people to remember him from his smile. He was always smiling with pretty white teeth. Always stayed clean. I just want a good image for him. And he was able to create that for his friends and everything he did," he said.