Family members of the 19 children and two teachers killed in the Uvalde school shooting rallied at the Texas State Capitol with March for Our Lives Saturday.

AUSTIN, Texas - Family members of the 19 children and two teachers killed in the Uvalde school shooting rallied at the Texas State Capitol Saturday.

Thew were joined by survivors from the 2018 mass shooting at Santa Fe High School and youth activists from across Texas.

They want the minimum age to purchase a firearm to be raised from 18 to 21.

"My sister got all dressed up because she knew it was going to be awards ceremony. My sister was excited to hand out these awards," said Maggie Mireles, whose sister, Eva Mireles, was killed in the mass shooting at Robb Elementary. "She did not know what her fate was going to be. My sister leaves behind her only child who had to go on without her."

The families of the Uvalde victims are still heartbroken over their loss.

"Lexi will forever be 10 years old," said Kimberly Rubio, who is the mother of Alexandria Rubio. "And when I close my eyes at night, I dream of a different life."

Some struggle trying to explain to younger family members what happened.

"When is Xavier coming home? I myself still don’t know how to answer that. It breaks my heart, but I have to tell them he’s in heaven and he will never come home," said Felicia Martinez, who is the mother of Xavier Lopez.

They’re calling for gun reform measures, along with the March for Our Lives organization. 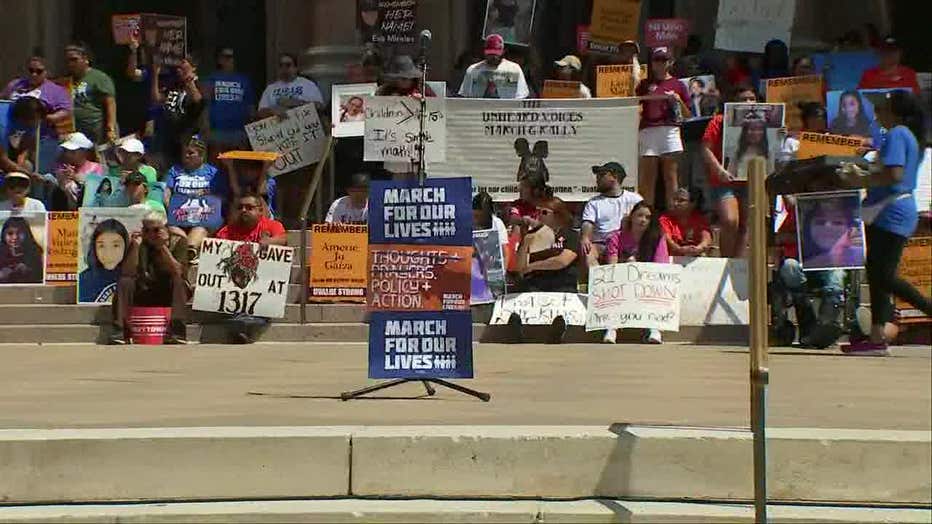 "Not everybody agrees on an assault weapons ban, but that’s why we want to reach a compromise, meet in the middle, and raise the age to 21 to buy an assault weapon," said Jazmin Cazares, who is the sister of Jackie Cazares.

They’re asking Texas Governor Greg Abbott to call a special session to raise the minimum age to purchase an AR-15 to 21.

"In the midst of an election campaign, it’s probably something that the governor is unlikely to do," SMU political science professor Matthew Wilson said.

Wilson added that some Republicans, however, appear to be onboard with raising the minimum age.

"I would expect that if there’s not a special session, that this will be something that will be put on the agenda of the regular session of the Texas Legislature," he said.

The governor’s office sent a statement to FOX 4 Saturday that: "Governor Abbott has taken immediate action to address all aspects of the heinous crime committed in Uvalde, including issuing six directives to make schools safer and working with Texas legislative leadership to provide $105.5 million to support additional school safety and mental health initiatives."

The governor’s office statement went on to say, "all options remain on the table."

"I’m a conservative Republican. I’m a gun owner myself, but I can stand amongst Democrats and see the changes that need to be made," said one family member of one of the Santa Fe school shooting victims.

Ones in Uvalde, like Mireles’ sister, wish more could’ve been done to stop the gunman.

"Eva was strong. Eva could’ve taken him, but not against this weapon. She couldn’t. No one could. These weapons belong in the military, they belong in the way, not in the classroom," Maggie said.

It’s up to lawmakers to decide what changes come next.