The UIL announced punishments for both Duncanville's boys and girls basketball teams on Monday.

DUNCANVILLE, Texas - The UIL handed down punishments for both the Duncanville boys and girls basketball teams for violating rules.

At a meeting on Monday, the UIL decided the Duncanville boys basketball team will forfeit all games from the 2021-2022 season in which the team played an ineligible player.

The forfeits include all postseason games and the 2022 Conference 6A State Championship.

McKinney High School will now be named the state champs.

The ineligible player, Anthony Black, now plays at the University of Arkansas.

In the summer of 2021 he transferred from Coppell to Duncanville.

Last year, the UIL ruled him ineligible to play because of the nature of the transfer.

He ultimately played due to court rulings.

The district disputes that call saying, "the player's eligibility was the subject of court action. At all times that the student played at Duncanville, the player did so under a valid court order."

The UIL also suspended Duncanville High School head coach David Peavy for one year and will be on probation for three years. 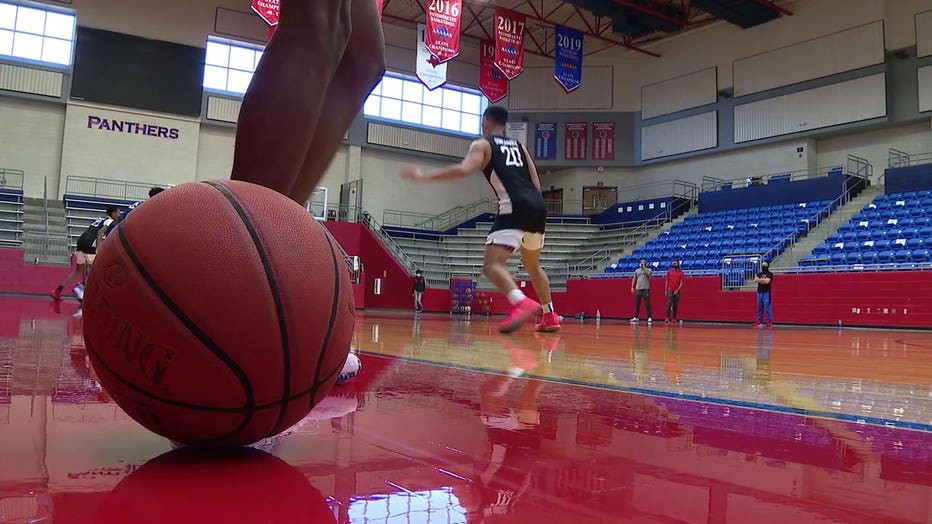 The girls' basketball team will also be suspended for from this year's playoffs for violating recruiting rules and practice restrictions.

According to the UIL, Coach LeJeanna Howard advertised she was having an open gym tryout back in August, two months before practices are allowed to start.

At least one player from Arlington Bowie High School.

Howard denied it was a try-out for the team, calling it just an open gym.

She did admit it was her responsibility to check what is posted on the team's social media page.

Howard was suspended for a year with three years of probation.

The Duncanville girls team is currently ranked No. 4 in the state by the Texas Association of Basketball Coaches.

Duncanville's Athletic Director Dwight Weaver was given a public reprimand and the girls team as a whole will be on probation for the next three years.

Duncanville ISD released a statement Monday evening saying prior to the hearing they already acted to impose a "substantial and appropriate disciplinary suspension for Coach Howard."

The district said they respect the committee's decision regarding the punishment toward the girls program, and that it strongly disagrees with the UIL stripping away the boys state title.

"These are significant and unprecedented consequences for both programs, and students will suffer the most from today's decisions," said Duncanville ISD Superintendent Dr. Smith.

FOX4 spoke to parents Monday afternoon picking up their children.

"I wouldn't expect it out of Duncanville due to all the championships they have. They don't have to do it," said one parent.

"It tampered the program though. They will now be watching every move they make, but also puts a damper on the program," Hobbs said.

It is not the first time Duncanville High School has had issues with the UIL.

The Duncanville boys basketball program was put on 2-year probation by the UIL in 2018 after a fight with the DeSoto basketball team.