Woman got so drunk she forgot she had swallowed a 6-inch spoon, report says

The woman's doctor said that if she had waited, or ignored the pain, the spoon could’ve caused ulcers or a life-threatening infection.

QINGDAO, China - Doctors in China are making an example of a patient who allegedly got so drunk she swallowed a 6-inch spoon and forgot about it the next day.

The patient, described as hailing from East China’s Shandong Province, reportedly went to the People’s Hospital of Jimo District earlier this month for stomach pain.

An X-ray revealed the 6-inch spoon in her abdomen to be the cause, AsiaWire reported. Rather than open her stomach, Dr. Fan Guangxue decided on a gastroscopy procedure, which involves inserting a thin tube down a patient’s throat. 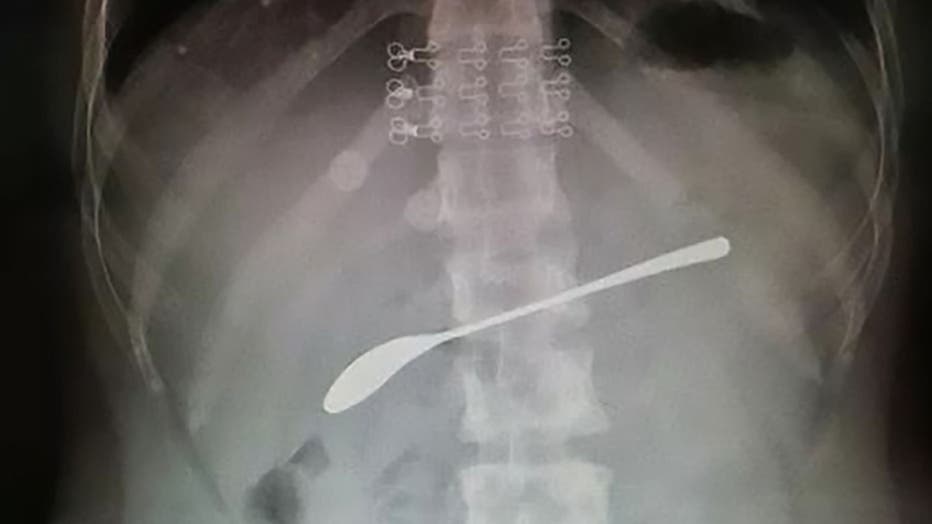 This X-ray shows a 6-inch steel spoon resting inside the stomach of a young woman who drunkenly swallowed it the night before and forgot about it until her stomach began hurting the next day. (AsiaWire)

“But removing a spoon through gastroscopy is very tricky,” Fan told AsiaWire. “Firstly the spoon was over 10 centimeters long. It was also very smooth and slippery, and therefore difficult to control or grab hold of.”

He then inserted a snare loop to grab hold of the spoon and maneuver it back out through her mouth.

“Even after snaring the spoon it was difficult to pull it out,” he told AsiaWire. “It would get stuck along the way out.”

Fan said that if his patient had waited, or ignored the pain, the spoon could’ve caused ulcers or a life-threatening infection.

“Do not put small things in your mouth when you’re drunk,” he said.

It was not immediately clear how old Fan’s patient is, or where she is in her recovery.

Get updates to this story of FoxNews.com.