It was a close call for a Grand Prairie motorcycle officer and the driver who, police say, tried to run the officer over.

GRAND PRAIRIE, Texas - It was a close call for a Grand Prairie motorcycle officer and the driver who, police say, tried to run the officer over.

The officer got off his bike before the suspect hit him. Police are trying to determine if the suspect's injuries are from bullet fragments from the shot the officer fired at the suspect or glass from the windshield.

The officer is okay, and the driver sustained non-life-threatening injuries after a short police chase ended in a Grand Prairie cul-de-sac.

The driver ended up in the hospital and police custody after police say he tried to run over a motorcycle officer who tried to stop him for speeding.

"But instead of pulling over, the driver kept driving," he said.

Police say the man driving the four-door Nissan with a handicapped placard on the rearview mirror was 25-year-old Jose Vega. 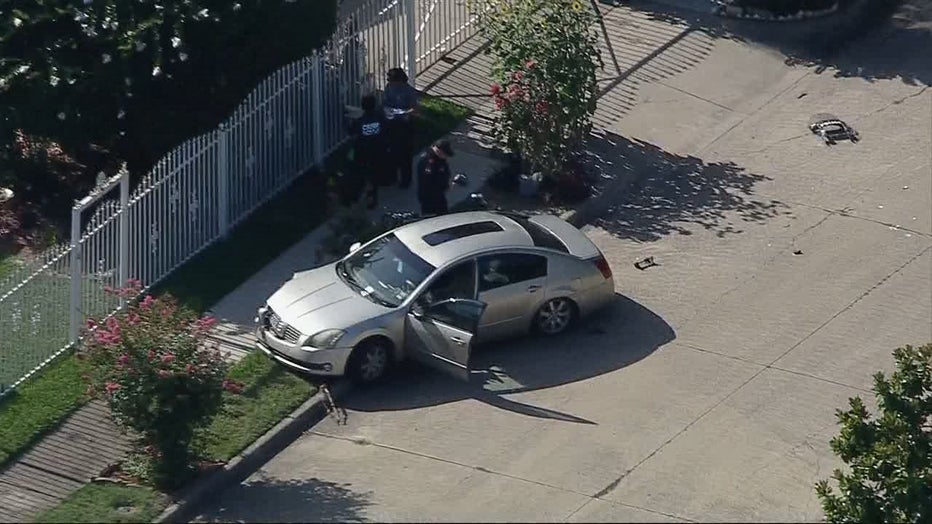 They say during the pursuit Vega turned onto Springdale Lane and then Springdale Court, which is a dead end. An additional police SUV ordered Vega to pull over, but police say Vega made a u-turn.

"Instead, the suspect accelerated and went straight towards the motorcycle officer," Beseda explained.

Beseda says the officer hopped off his motorcycle just before Vega rammed it and, fearing for his life, fired a single round through the windshield of the Nissan. The motorcycle ended up partially under the car.

It’s unclear why Vega didn't stop, but police say during the chase they saw him throw some kind of contraband out of the car window.

The officer is on paid administrative leave, which is standard routine.

Once Vega is discharged from the hospital, he will be taken to jail and will likely face aggravated assault with a deadly weapon.