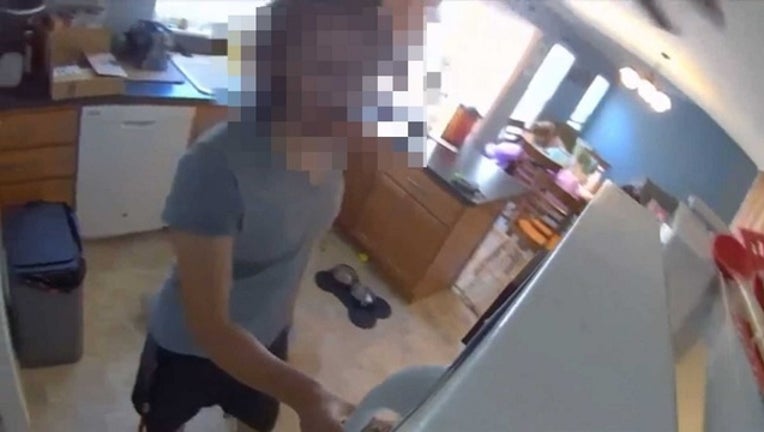 "From here on out, for us it's only gonna be friends or family or close people that we know to take care of our dog," said the homeowner. (Brent Overholt via Storyful)

FOX NEWS (STORYFUL)  - Get this dog walker to obedience school.

A dog walker working with Wag, an app-based service for pet owners, was caught behaving very badly during a visit to his clients’ house last Wednesday, when he was filmed raiding the clients’ fridge and sneaking swigs of their booze.

Brent Overholt, of Streetsboro, Ohio, had signed up for the dog-walking service after bringing home a golden retriever puppy — named Pluto — for his wife Claire, figuring that Wag’s walkers would be properly vetted and trained to walk Pluto while he and Claire were at work, Fox 8 Cleveland reports.

Upon reviewing their security footage, however, Brent found the dog walker to be less-than-professional, rummaging through the couple’s fridge and cabinets, sometimes with his hand down his pants.

“He drank what we think is milk out of the fridge, and put the milk back in the fridge,” said Brent, speaking with Fox 8 Cleveland. The Wag employee then took a few sips of bourbon from a bottle the Overholts had on the counter.

As seen in the surveillance footage, the man eventually became aware that he was being filmed when the camera fell from the fridge (after he opened it for a second time). He quickly reset it atop the refrigerator and left.

Wag has since confirmed the man was removed from its roster of independent contractors.

“In this case, we've removed the walker from our platform, so that they can no longer provide services through Wag!, and our dedicated Trust and Safety team is in contact with the pet parent to address his concerns,” the company said in a statement obtained by Fox 8.

"From here on out, for us it's only gonna be friends or family or close people that we know to take care of our dog," he said.