Approximately 100 off-duty Southwest Airlines dispatchers picketed outside of Dallas Love Field Airport on Monday. The union the represents the dispatchers say they are in an ongoing contract dispute with the Dallas-based airline ahead of the busy Christmas travel season.

DALLAS - Approximately 100 off-duty Southwest Airlines dispatchers picketed outside Dallas Love Field Airport on Monday. The union the represents the dispatchers say they are in an ongoing contract dispute with the Dallas-based airline ahead of the busy Christmas travel season.

"The problem is killing our morale," said Jeff Jackson, the vice president of TWU Local 550, which represents some 500 Southwest Airlines flight dispatchers.

The union says the dispatchers haven't gotten a new contract since 2019.

"Southwest is all about the culture and these long, drawn out negotiations do not do that. It kills the culture." said Jackson. 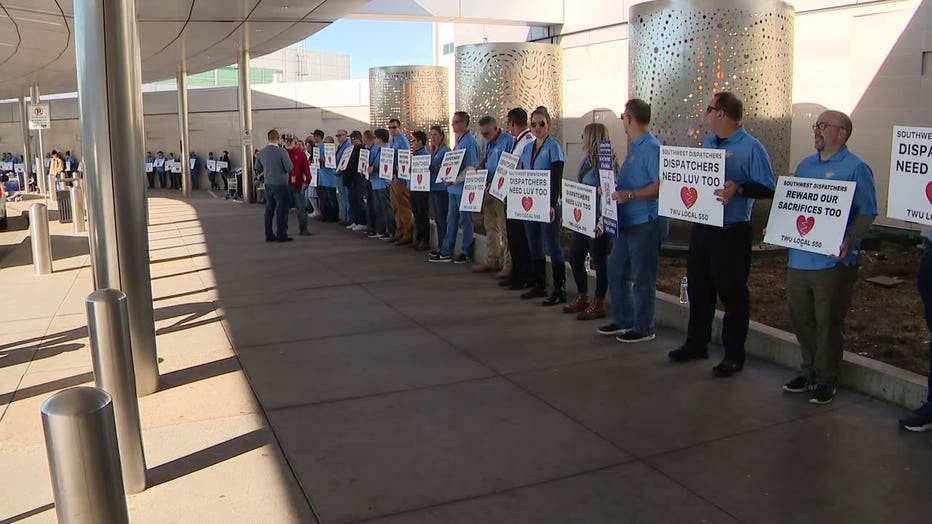 The dispatchers are just the latest group of airline industry employees to picket.

"I think both sides have an interest in keeping this conversation alive in the public square, making consumers aware that these negotiations are happening," said Gabe Saglie, the senior editor for Travelzoo.

Saglie says many of these contracts were done prior to the pandemic.

He calls this a "new era" in aviation that has revealed new problems and concerns for airline employees.

"These employees are trying to keep their employers accountable for issues that they find obviously important, and that in the long run, it certainly can affect the travel experience," Saglie said.

Southwest Airlines respects the rights of its Employees to express their opinions. We are committed to reaching a new agreement in the near term that enhances the lives of our Dispatchers.

The union says if they reach an impasse with Southwest Airlines they could end up in mediation. The executive branch of the federal government could also get involved.