Top doctors in North Texas held discussions about including vaccination status when admitting patients if hospitals become too overwhelmed.

Top doctors in North Texas held discussions about including vaccination status when admitting patients if hospitals become too overwhelmed.

It would only apply to critical scenarios, like if hospitals fully run out of staffed beds and are on the brink of collapse.

Currently, under those conditions, considerations like underlying health conditions and age would apply, but doctors considered whether vaccination status would also be included.

The discussions happened between members of a task force which provides guidelines for hospitals that reach critical mass.

For now, the discussion about vaccination status remains just that, a discussion.

COVID-19 patient numbers in North Texas are closing in on 3,000 people, most of which are not vaccinated.

As of Thursday, there are just 62 staffed ICU beds available in North Texas. 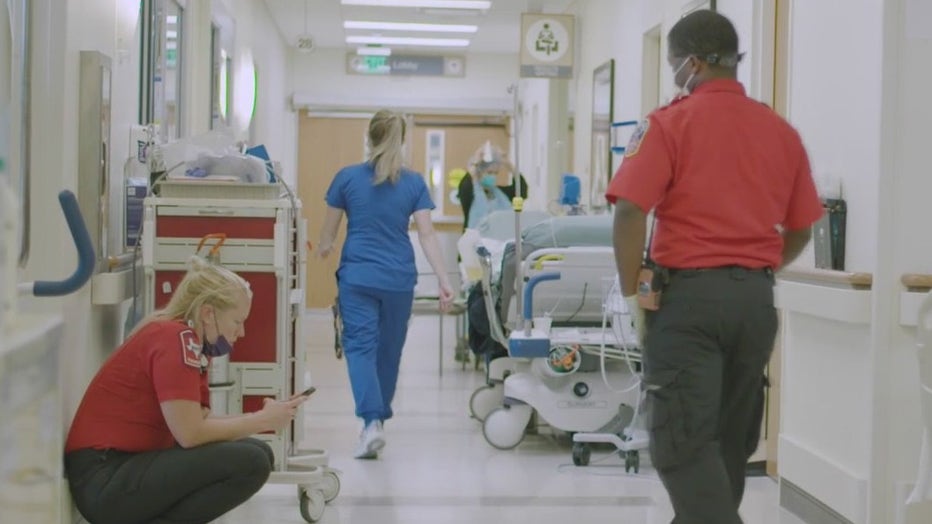 The state sent in reinforcements to hospitals this week, as a pre-existing staff shortage was made worse by the latest surge.

"What do we have that's left? How much wiggle room do we have? There was a day last week we were down to 12 beds in Dallas County. Those are ominous numbers," said Dr. Mark Casanova, with the Dallas County Medical Society.

It summarized a discussion about possible new guidelines if things get worse and hospitals run out of beds.

One of the guidelines discussed was whether to factor in vaccination status if doctors had to choose which patients to admit.

Dr. Casanova is a member of the task force.

"As part of our deliberation, the question of vaccine status was raised," he said.

Part of the memo said:

"Many are understandably angry and frustrated with the unvaccinated, but triage must remain grounded upon likelihood of survival. Health care professionals should continue to honor duties of care and compassion."

He said, in a situation where one bed is left, doctors have to make a decision based on multiple health factors to see if a patient would survive treatment.

The discussion was whether vaccination status would also be on that list.

"If we find ourselves in a situation where our capacity to provide high level, effective, life sustaining therapies is overwhelmed by the number of patients under our roof and we do not have the ability to transfer to other hospitals, other care settings, we will have to do an individualized assessment of each patient. How they're doing clinically, and answer the question as to their likelihood of survival to discharge," Dr. Casanova explained.

The memo also reiterated that vaccination significantly lowers the risk for severe illness and death.

"We are doing all we can to avoid the worst case scenario. When you hear health care professionals plead with the public to get vaccinated and wear masks, it's for a reason. It’s for what we're potentially facing in North Texas in the near future unless we can stem the tide," Dr. Casanova added.

Governor Greg Abbott announced Thursday the state will double the number of travel staff to act as reinforcements for hospitals.