Dallas County leaders say COVID-19 cases may be starting to trend in the right direction with the help of more people masking up, but it’s still too early to let down our guard.

DALLAS - Dallas County leaders say COVID-19 cases may be starting to trend in the right direction with the help of more people masking up, but it’s still too early to let down our guard.

It comes on the same day that Dallas County reported 31 new coronavirus deaths, making it the second deadliest day of the pandemic. 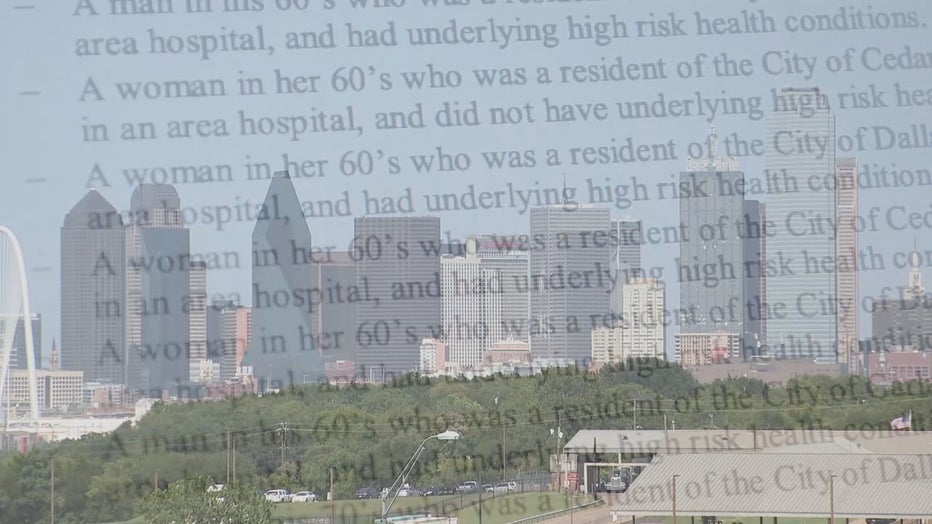 “641 for the day. It’s up from 382 yesterday. But significantly down from last week and the recent stretch of 18 consecutive days of more than 1000 new cases,” he said. “It’s been flattening out, which is good. It’s better than an increase, but it’s still not a decrease.”

But Huang cautions hospitalizations and occupied ICU beds are still going up. They are lagging indicators that will hopefully turn around.

“As the numbers get down and you start to see clusters pop up, that’s where we really want to be prepared to pounce on those situations,” the doctor said.

Dr. Huang also making a case for staying the course with plans for contact tracing.

Commissioner John Wiley Price says he supports it but expressed serious concerns about the $10 million spent to hire staff with the goal of handling 192 cases a day, which is a number far below the actual number of new cases.

“I’m just trying to figure out how are we managing this?” Price asked. “Are we just throwing the money up in the air right now?”

And then there’s the test site at the University of Dallas, which relocated to Eastfield College in Mesquite. It’s operated by Honu Management Group out of Washington state.

“I am concerned about this contract. Who is monitoring it? What’s really going on?” Price said.

The site is jointly funded by the city of Dallas and Dallas county, which put up $7.2 million from federal funds.

“I and my staff were tested Tuesday morning of last week and have yet to get a result,” said Dallas County Commissioner Theresa Daniels. “So we are running on the outside of the curve.”

Doctors have said deaths are a delayed indicator for COVID-19. If cases continue to decline, the number of deaths will start to decline as well.

The new numbers bring the total case count in Dallas County to 52,131 and 722 deaths.