DeSoto grandmother, 62, recovers from COVID-19 after two months in hospital

DALLAS - After nearly two months at Methodist Charlton Medical Center in Dallas and more than a month of a ventilator, a 62-year-old grandmother from DeSoto was released and moved to a rehabilitation center.

She was the hospital's first COVID-19 patient. There were times her family didn't think she'd make it. They thought on several occasions they would be planning her funeral. But her medical team and family never gave up on her.

Barbara Sterling was wheeled out of Methodist Charlton Medical Center on Monday after spending nearly two months in the ICU due to COVID-19. 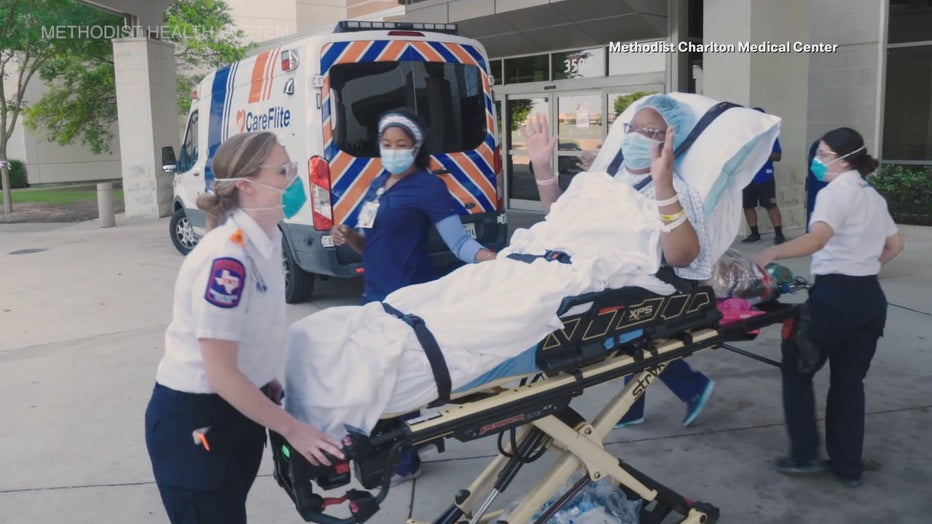 Jennifer Allen is the ICU nurse manager and helped care for the 62-year-old.

“She's a complete miracle,” Allen said. “She went from not responding and not awake to giving us the Miss America wave as she rolled out.”

Allen remembers the exact date Sterling was brought in on March 22 because she was the hospital's first COVID-19 patient.

“I feel like we were kind of on this journey with her,” Allen said. “We were learning what is COVID? What does COVID look like? That was Barbara.”

Sterling spent 54 days in the ICU. For 33 of those days, she was on a ventilator.

Demarcus Freeman is Sterling’s son and lives in New York. He had to rely on relatives in North Texas to keep him posted. The outcome was grim.

“My brother told me the hospital did not feel that she would make it through the night,” he recalled. “I just kind of shut my phone off and took a walk because I didn't know if that was it.”

At one point, Sterling's organs began shutting down. She was put on dialysis. Sterling finally began to show signs of improvement after she was given plasma from a COVID-19 survivor.

“I'll never forget it,” Allen said. “That will probably be a very pivotal moment in my career.”

Doctors and nurses who treated Sterling and her family and friends cheered her on Monday as she was released from the hospital. She was loaded onto an ambulance en route to a rehab center to continue her recovery.

Freeman watched from home on FaceTime.

‘She seemed to turn around in 24 hours,” he said. “It brought on a ton of emotion. I was crying the entire time.”

Freeman spoke to his mother by phone on Tuesday. He says her voice is coming back, and she's eager to start rehab. She's determined to get back to her family and church functions.

Freeman says the entire family is forever grateful to the hospital staff.