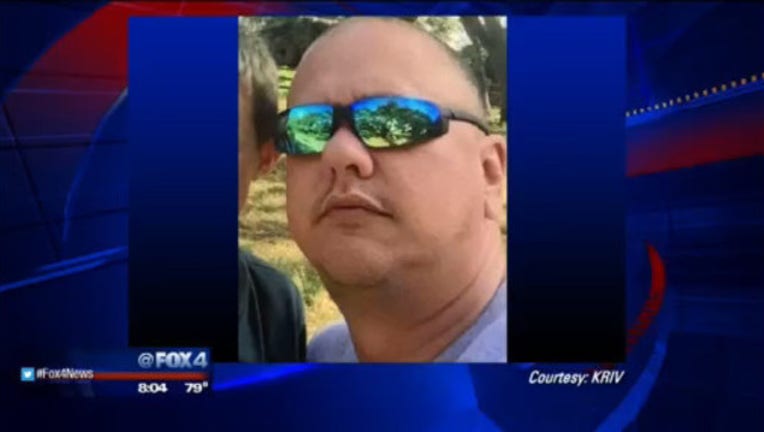 HOUSTON (AP) — The search for the suspect in the death of a uniformed sheriff's deputy who was shot several times while filling up his patrol car at a suburban Houston gas station continued Saturday morning, authorities said.

Police were speaking with a person who has information about Friday's shooting, Harris County Sheriff's Office spokesman Deputy Thomas Gilliland said, but that the person is not under arrest, nor is he a suspect or person of interest. No one has been charged and the intensive search for a suspect is ongoing, he said.

Police described the suspect as a man believed to be between 20 and 25 years old and stands about 5-foot-10 to 6-feet tall. He was wearing a white T-shirt and red shorts and driving a red or maroon pickup-style truck with an extended cab.

Goforth was a 10-year veteran of the force, had a wife and two children, according to Harris County Sheriff Ron Hickman.

"In my 45 years in law enforcement, I can't recall another incident so cold-blooded and cowardly," Hickman said.

No motive was determined for the shooting, he said.

Goforth had traveled to the Chevron station after responding to a routine car accident, Gilliland said.

He said Goforth died at the scene.

"I can tell you with diligence and justice the suspect will be caught," Gilliland told the newspaper. "And he will be brought to justice ... This is a very callous individual."

Harris County Sheriff's deputies and homicide investigators joined officers from other agencies, including the Texas Department of Public Safety and the Houston Police Department, in the search.

"This is a very tough moment right now for the Harris County Sheriff's Office," Gilliland said. "Keep us in your prayers and in your thoughts."

"We've been warned of things like this, because of public sentiment nationally and events over the last few years ... It's just horrific. That's the only way to describe it."