Police say the shootout was bad blood over a robbery involving a man who was out on bond for murder.

DALLAS - Two people are dead and three others were shot early Friday morning in Deep Ellum.

Police say the shootout was bad blood over a robbery involving a man who was out on bond for murder.

It was a busy night in Deep Ellum. The shooting happened around 2 a.m. just as the clubs let out and a crowd filled the street.

Police said there was a group of people gathered near a barbecue truck parked at Elm and Crowdus streets.

There was some sort of dispute with that group that quickly led to gunfire. Five were shot, and two were killed.

The couple who owns the barbecue truck said they were taking orders when they heard the shots. They dropped to the ground and took cover.

Police said they happened to have officers nearby, who responded within seconds.

All of it was captured on video from police surveillance.

Dallas police said the two men who died had beef with one another.

Another guy was also involved in the deadly shooting, while two innocent bystanders were caught in the crossfire.

"We see people laying on the ground shot, and we're just like, what happened? There was no fight, no arguments," Glenn Logan recalled.

According to Dallas police, 31-year-old Quintin Lowe was standing on the sidewalk near Elm Street and Malcolm X Boulevard. 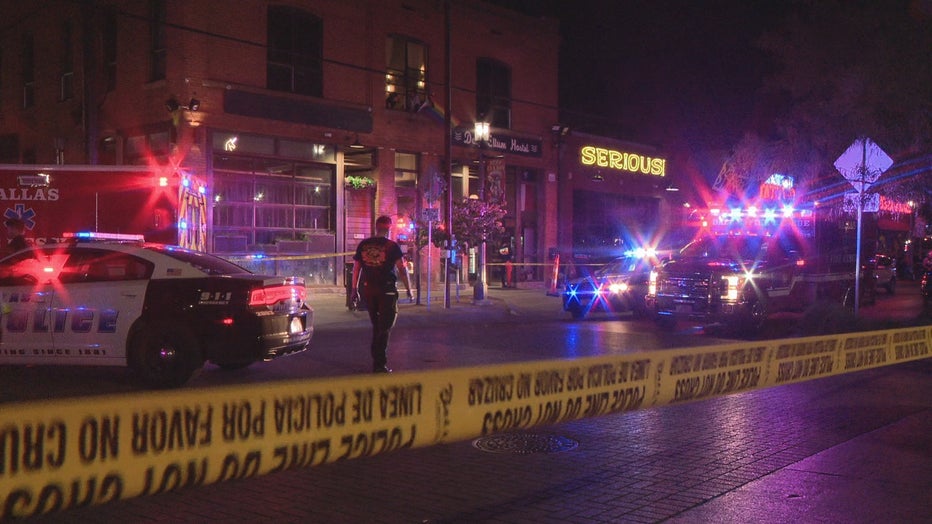 "Our detectives determined that back on May 7th, Quinton Lowe was responsible for setting up an attempted robbery of Jermaine Lewis," said Kristin Lowman with Dallas PD. "So while he was in Deep Ellum, he recognized Lowe, and that is when the shooting started."

Lowe and Lewis died from their injuries. Barrow was shot but survived.

Investigators said two other men, who were bystanders, were also hit by the gunfire. They were taken to the hospital and are expected to be okay.

"I took cover. I got up under the truck to make sure I didn't get hit," Evelyn recalled.

Christian Lefebvre heard the gunshots from inside the hotel he’s staying in across the street. He shot cell phone video as officers surrounded the crime scene.

"Very shocking for all of us because there were a lot of people outside," he said.

Dallas police said Lowe was out on bond for a murder charge.

That arrest was for a 2018 incident in Lewisville that stemmed from a fight over a parking space, where police said Lowe shot and killed a man on a motorcycle.

People are still shaken up after the shooting in Deep Ellum.

"I don't know what I feel about this Deep Ellum right now. I love this part of town, but it’s kind of scary, yeah," one person who was in Deep Ellum overnight Friday said.

The deadly encounter happened a day after the Deep Elum Foundation unveiled its security plan, complete with 25 cameras, in response to repeated late night disturbances.

The police chief says preventing gun violence like this is a huge challenge.

"If you look at the brazenness of what occurred in Deep Ellum, we had officers right there," Chief Eddie Garcia said.

And in fact, some of those officers were the first to render CPR to the injured.

Despite the quick resolution, some witnesses' sense of security has been shattered.

"Wifey doesn’t want to do it anymore because it’s just too much violence," Glenn said.

"I don't think it’s worth my life," Evelyn added.

Both Dallas police and the Deep Ellum Foundation say keeping this entertainment district safe is a community effort.

Police said Barrow could face criminal charges once he is released from the hospital, as he too fired a weapon.

No additional information has been released about the innocent bystanders.

Shutting down the two main streets of Deep Ellum is still going on. Barricades are up at 10 p.m. to deter vehicle traffic.