The lieutenant governor said the ongoing busing of migrants to D.C. and the enhanced inspection of trucks coming over the southern border into Texas last month, which clogged checkpoints for days and delayed deliveries, are efforts to get the federal government to sue Texas. "I want to force a showdown with the federal government."

MIDLOTHIAN, Texas - With fears of another migrant surge looming, he now wants to force a showdown with the federal government over the right to protect the state's southern border.

Patrick spoke at a rally for Dawn Buckingham (R-Lakeway), who is running for land commissioner.

Patrick says, according to U.S. Border Patrol, about a half a million migrants will come over the southern border every month if Title 42 is lifted. He believes the issue of border security will end up before the U.S Supreme Court.

Speaking at a Republican campaign rally in Midlothian on Wednesday, Patrick said the state has allocated some $4.2 billion to border security since the last legislative session.

That includes approximately $500 million that Gov. Greg Abbott pulled from other agencies, including DPS, to continue funding for this fiscal year that runs through August.

"Up until this year we've been spending $400 million-plus on border security," Patrick said. 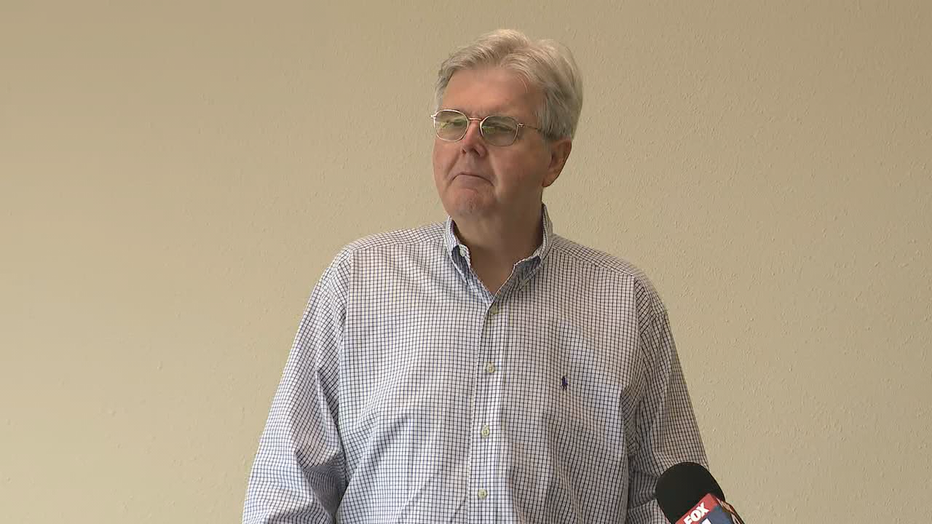 But so far, there is little to show for the added expense.

According to the New York Times, federal agents recorded nearly 129,00 crossings into Texas in March, which is about 11,000 more than the same month last year.

Patrick also talked about the Biden administration's plan to let Title 42 expire on May 23.

"If the Biden administration repeals Title 42, about a half a million people a month will come across the border," he claimed.

Title 42 was put in place by the Centers for Disease Control in 2020 to stop the spread of COVID, effectively closing the U.S.-Mexico border to most migrants.

Laura Collins is the director at the Bush Institute SMU Economic Growth Initiative. She says it is hard to predict exactly how the end of Title 42 will impact migrant surges.

"Title 42 is a public health policy, not an immigration policy," she said. "So we just don't really know what that pent-up demand is going to look like. If it takes too long at a port of entry, are people going to get desperate and try to cross between ports of entry again? There will obviously be an adjustment period."

Meanwhile, Patrick said the ongoing busing of migrants to D.C. and the enhanced inspection of trucks coming over the southern border into Texas last month, which clogged checkpoints for days and delayed deliveries, are efforts to get the federal government to sue Texas.

Second bus from Texas drops off migrants in D.C., near U.S. Capitol

"I want to force a showdown with the federal government to where we go to the Supreme Court on a state's right to protect the border," he said.

The White House has not yet issued a response to Patrick’s comments.