Many across North Texas have without running water for days, and the toll is especially hard on people in the low income community of Vickery Meadow.

DALLAS - Many across North Texas have without running water for days and the toll is especially hard on people in the low income community of Vickery Meadow.

People desperate for water lined up buckets at a fire hydrant at the Villas Del Solamar apartments in the Dallas neighborhood to the east of Central Expressway and Park Lane.

Dallas has four water distribution sites, but none that are near the Vickery Meadow neighborhood.

"It's been hard, it's been so rough, it's so sad," said April Collins.

The only source of water is from the kindness of strangers.

Someone managed to turn the fire hydrant on Monday near the apartments. But Tuesday, residents were left to wonder where they would get water to wash dishes, do laundry and flush toilets.

"It's been crazy. It's hard to do a lot of things when you don't have water. You can't bathe, brush your teeth, wash your face, cook," said Termayne Walker.

"Water is heavy. This is just a three gallon jug, but that's 21 pounds. I go upstairs, it is hard for me," said Bill Shanks.

"I don't know whether I would be happier without water or electricity," Shanks said. 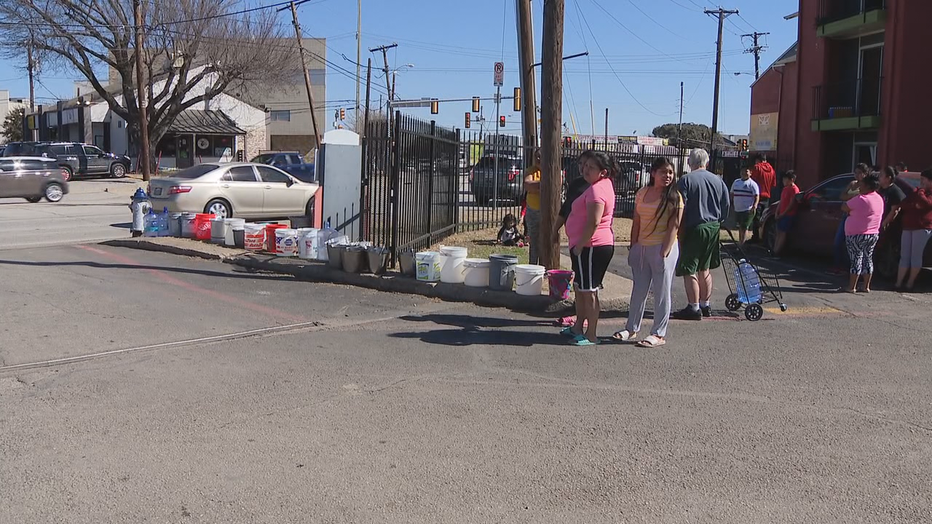 On Monday, the library across the street filled up containers of water for people. But the library was no longer doing that on Tuesday, leaving people to hope the hydrant gets turned back on.

A U-Haul filled with water that appeared during the day seemed like a mirage, but it was real. It was from a group of Dallas residents who have been picking up water from the city and then delivering it where they hear there is need.

"5,000 people that we're trying to get people water to today," said Ben Haver.

Vickery Meadow is in Jennifer Gates' district. The Dallas council woman says people need to call 311 or their council member's office to let them know where water is needed.

"This is an emergency, I recognized it last week. And I was so thrilled to see nonprofits stepping up and coordinating and partnering with the city, because I knew we'd have to be able to reach people. Especially when schools were closed down," Gates said.

With no sign of any work on the pipes, residents just want to know how much longer they will have to live like this.

"Test of faith. This is definitely what's going to make us stronger," Ricky Mills said.

After FOX4 let councilwoman gates know that library staff told me they were no longer allowed to fill up containers, she made a call and was assured the library is supposed to still be helping residents fill up their containers.

A PR firm out of California representing the apartment complex said it would what it can to assist residents and work with authorities to speed up the process of fixes. There were no dates mentioned in the statement to FOX4.

How eligible North Texans can apply for FEMA disaster assistance