Fire officials have determined that the 5-alarm fire at a Dallas senior living facility was caused by an improperly discarded cigarette.

DALLAS - Fire officials have determined that the 5-alarm fire at a Dallas senior living facility was caused by an improperly discarded cigarette.

A large portion of Serenity Apartments, located in Far East Dallas, is being demolished following the fire that forced dozens of seniors out of their homes and injured two firefighters.

Dozens of senior citizens are now living in hotels after their apartment building in went up in flames. 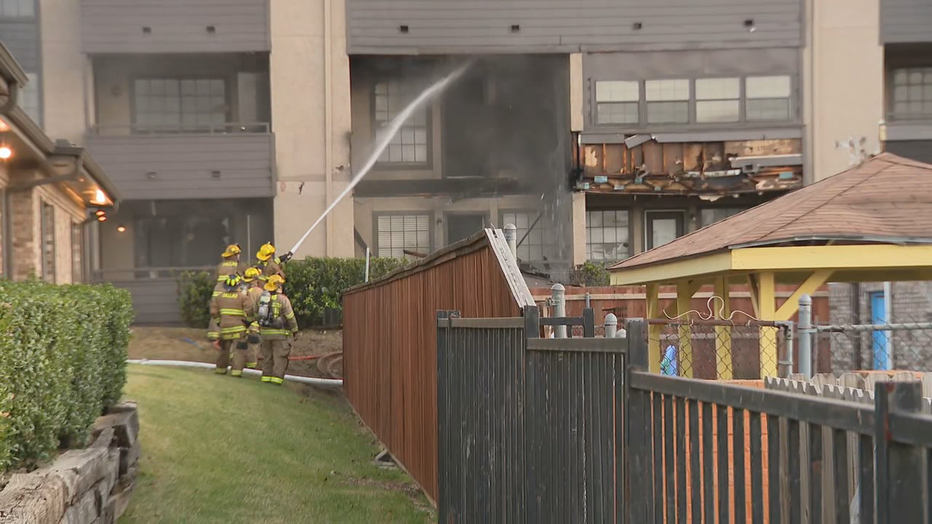 The fire broke out at about 6:30 p.m. Thursday, and more than 120 firefighters responded.

Two firefighters were injured while battling the fire. Both have been treated and released from the hospital.

No residents were injured.

Investigators said someone tried to put out a cigarette on a balcony railing, but it fell, and the smoldering cigarette started the fire.

Jason Evans, spokesman for Dallas Fire-Rescue, explained how one resident started it all on a second-floor balcony.

"He admitted to using unconventional means, putting the butt out on the wood," Evans said. "We believe he did not extinguish it fully. It managed to get in the spaces and smolder for a while before it ultimately combusted."

"Most difficult part is it extended in wall spaces. Any time a fire is hiding in wall spaces, it may not reveal itself as open flame until it is exposed to air," Evans explained. "A lot of the work with this type of fire is using hand tools to breach through walls and ceiling, and if you ask any firefighter, that is a lot more difficult than holding a hose line."

Evans said the apartment management team evacuated most residents before firefighters arrived. The city took 68 of them on DART buses to the Samuel Grand Rec Center.

By 1:30 a.m. Friday, they were all able to get into hotels or stay with family members.

Carol Shelton talked about how quickly it all happened.

"Came out, and it was smoke everywhere, and they didn't let us come back, and my dog got stuck in the apartment and I was cooking butter beans, and I left them on," she said.

Shelton is trying to help her friend who lost everything.

Before the building was demolished, a resident worked with a Dallas firefighter to help retrieve her friend's harp.

"Yes, this would be a first," the firefighter said.

"She plays [the harp] at Baylor for people at end of life," Susan Rudman said about the significance of that harp.

An automatic alarm is what alerted Dallas Fire-Rescue and the management team, potentially saving lives.

Evans said the two injured firefighters were among those working to put out the flames.

"One of the firefighters suffered injuries to his upper extremities and the other firefighter had injuries from a fall," he said.

The ribbon cutting for the complex was just a month ago.

"Acquired it last year, did a huge multi-million renovation, and part of it was a significant upgrade to fire repression and sprinkler system," said Ben Friedman, spokesman for Elevation Financial Group.

The fire department is classifying the fire as accidental, so the resident who started the fire is not expected to face criminal charges.

Elevation Financial Group is still working on long term arrangements for residents while the complex is rebuilt.