FOX 4 sat down with Dallas Police Chief Eddie Garcia to discuss violent crime and what the chief calls an aggressive plan of action.

DALLAS - Dallas police reported the city’s 100th murder of the year on Wednesday.

This time last year, Dallas was at 93. 2020 was the year Dallas saw its most homicides in nearly two decades.

FOX 4 sat down with Dallas Police Chief Eddie Garcia to discuss violent crime and what the chief calls an aggressive plan of action.

"We know that a very small percentage of the city is responsible for 50% of its violent crime," he said. 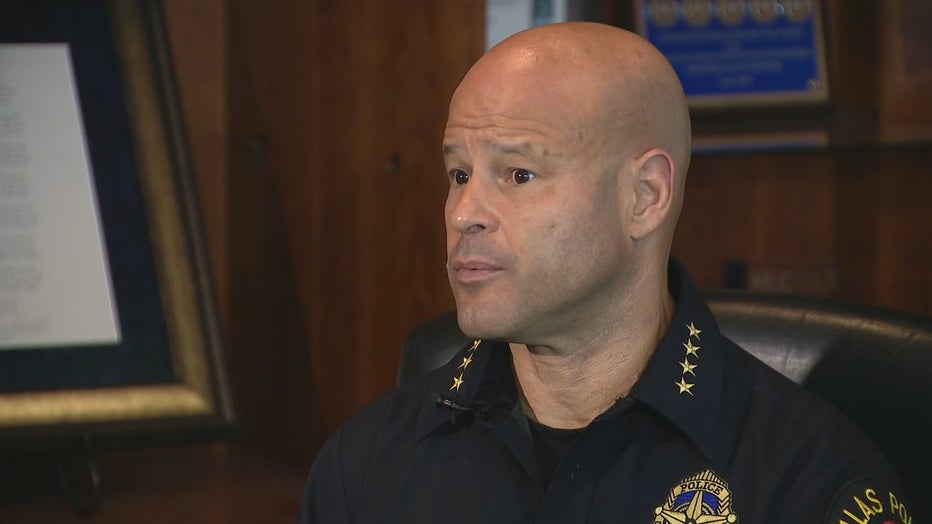 For perspective, a grid is about the size of a football field. There are 101,402 grids in Dallas, and police are targeting 47 of them. The chief believes violent crime is now trending toward the right direction.

"Quarter 1, we’ve had 172 incidents in those grids," he said. "Quarter 2, which is obviously now when we’ve implemented the crime plan six weeks ago, we’ve had 72 incidents with eight days left to go in the quarter."

However, Garcia admits it’s a small sample size. The plan calls for officers to be more visible, target repeat offenders and engage the community. Those are basics.

The belief is that violent crime is more likely to occur at these locations.

The department is sharing images on social media of guns, drugs and cash it’s seizing during arrests. Still, Dallas is on pace to eclipse last year’s record amount of homicides.

"I’ve got support from my manager’s office that we will start growing as a police department and in a responsible way," he said.

The department is down several hundred officers from where it’d like to be.

The city council voted to increase police spending last year, but it also cut $7 million of the police overtime budget, reallocating it to other areas.

"I guarantee you I have not met a neighborhood in the city of Dallas yet, regardless of language spoken, racial makeup or economic status, that has ever asked me for less policing," the chief said.

Of course, one issue in Dallas as of late is when some call police, they can’t get anyone immediately on the line at 911 dispatch. They’re short on call takers.

The chief is hoping to increase pay and benefits to make the job more appealing to potential hires. He also wants to set up a non-emergency line to separate less-urgent calls.