Dallas Mayor Eric Johnson is questioning his own director of transportation's authority to suspend scooters without Dallas City Council approval.

The decision first announced on Monday was so abrupt that it even caught the mayor off guard.

Dallas Mayor Eric Johnson is questioning his own director of transportation's authority to suspend scooters without Dallas City Council approval.

Surveillance video shows the damage that happened to the business where Larry Farris works downtown after vandals and looters turned scooters into weapons. And while he liked using the scooters himself for commuting, he believes things have been getting out of hand.

“Since the pandemic, downtown has become one giant playground,” Farris said. 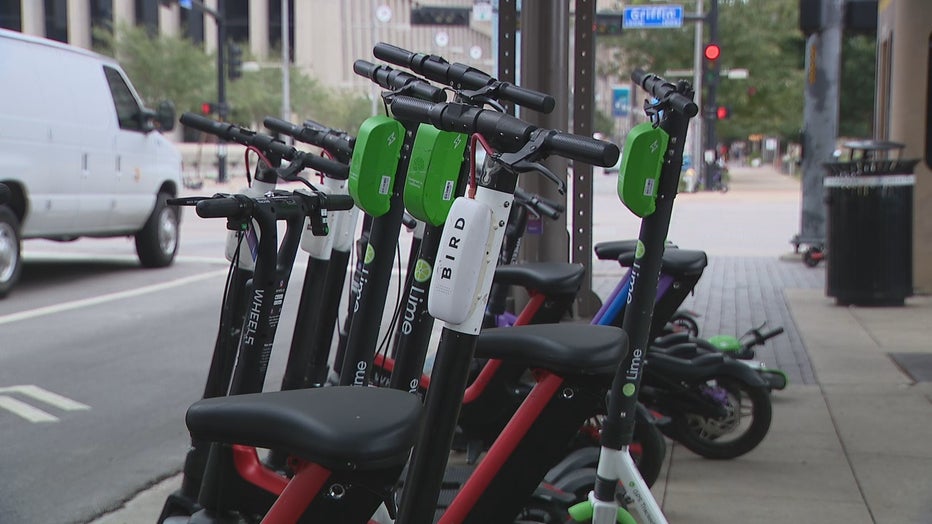 Downtown residents say people are joyriding scooters dangerously at night, despite the city's ban after midnight in downtown and after 9 p.m. in Deep Ellum.

“Some take scooters to go to Deep Ellum. They may commit a crime, hop on a scooter and leave before cops get there,” Farris said.

“Between 10 and 3 a.m., there’s this influx of night riders,” said downtown resident Keith McAndrew. “It’s loud. It’s intrusive when you’re trying to walk your pets down the sidewalk and you’re having to dodge scooters. They go 17 miles an hour.”

The concerns have prompted Michael Rogers, Director of Transportation for Dallas, to issue a temporary halt to the program starting Wednesday.

“A lot of folks that are just riding are not necessarily for commuting purposes. Just riding and getting into a little bit of havoc,” Rogers said.

But the announcement even caught Mayor Johnson by surprise. He tweeted: “I found out about it when you all did, and I don’t understand how the city can essentially suspend an ordinance without City Council action.”

Even Councilman Lee Kleinman, who chairs the transportation committee, tweeted that he, too, was unaware.

“It does bother me that there was not some indication of what was going to happen. We went from zero to 100 here on removing the scooters,” West said. “It was a failure of communication on the part of staff, frankly.”

The city council, as a whole, has not been briefed on the issues. But members of council tell FOX 4 that Councilman Adam Medrano and Councilman David Blewett were involved in the plans to stop scooter use in Dallas.

In a statement to FOX 4, Blewett states: “The suspension of scooter operations is primarily public safety related and not mobility.”

Councilman West says that some fought for scooters to come here, and they are an affordable means of short-distance transportation. He’s concerned that Dallas will be rid of them for good.

“I am concerned about the long-term viability of the scooter companies,” West said. “And I hope to see them come back.”

The decision first announced on Monday was so abrupt that it even caught the mayor off guard.

Rogers says he confronted the vendors about the problems. But last weekend, scooters were once again operational after the curfew hours. Even so, he said scooters are not to blame for the recent uptick in crime.

Rogers said since the pandemic, commuter traffic on the scooters has plummeted. So the temporary ban on scooters will not have a big impact on people getting to work.

Mendelsohn said she has talked with the city manager who acknowledged that this should have been communicated better to city leadership.

Mayor Johnson said in his tweet that he wants the city council to discuss the situation as soon as possible.

Even the mayor of Dallas was a little surprised by the order to get rented electric scooters off the streets. It takes effect Wednesday. Councilman Chad West talks to Good Day about the decision.