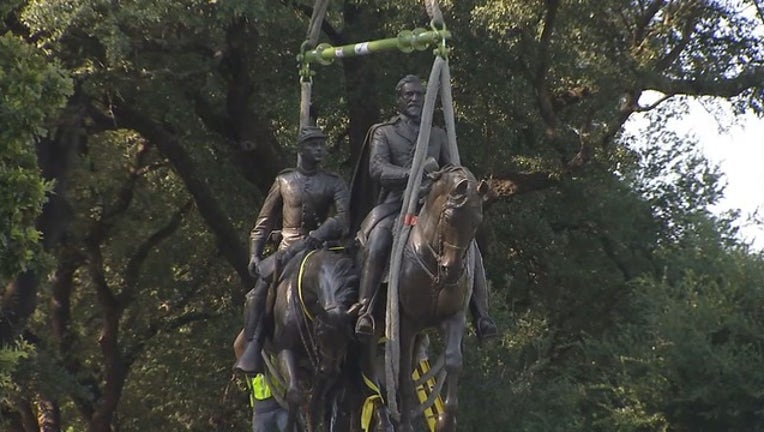 DALLAS - A Dallas-based law firm placed the winning $1.435 million bid for a statue of Confederate Gen. Robert E. Lee that the city put in an online auction almost two years after removing it from a state park.

Holmes Firm PC made the top offer for the bronze sculpture, according to documents from the Dallas City Council. It was among several Lee monuments around the U.S. that were removed from public view amid the fallout over racial violence in Charlottesville, Virginia, in 2017.

The firm, owned by Ronald L. Holmes, has not said what it plans to do with the statue or whether it is representing someone else who wanted the artwork depicting Lee and another soldier on horses.

Holmes' firm, which was identified in the auction as "LawDude," did not immediately respond to requests for comment on Wednesday.

Dallas Assistant City Manager Joey Zapata said the city does not have any plans to auction other Confederate symbols and the money for sculpture would go back into its contingency fund.

The assistant city manager said a task force that reviewed the sculpture along with other monuments and places in Dallas named for Confederate leaders recommended finding a local museum or educational institution to take them.

The assistant city manager said a Confederate monument near the city's convention center that is set for removal will be disassembled and put into storage.

The council last month designated the 1935 sculpture by Alexander Phimister Proctor as surplus property to be auctioned off. Dallas required a minimum bid of $450,000, which was the cost to remove the statue from a park in September 2017 and for storage.

A bill that passed the state Senate in May would have required approval from voters or state lawmakers to remove Confederate and other historical markers.

The bill would have taken removal powers away from local governments and other public entities who have grappled with calls to remove Confederate markers that are now facing protests over the era's racist history.

The Council was expected to vote Wednesday on whether to approve the sale to Holmes' firm.