Dallas ISD encouraged its teachers to show the livestream of the inauguration in their classes so students could witness the historic moment as it happened.

DALLAS - Just two weeks after the attack on the U.S. capitol, some North Texas school districts chose not to show the inauguration in real time, in case any violence erupted.

But Dallas ISD encouraged its teachers to show the livestream of the inauguration in their classes so students could witness the historic moment as it happened.

In an inauguration where the president declared democracy has won, Dallas ISD let FOX 4 join an afternoon Zoom class, as teachers capitalized on a key opportunity to show students exactly what that meant.

"Come together as one nation, under God, indivisible, to carry out peaceful transfer of power as we have for two centuries," President Biden said on Inauguration Day.

"Why is the peaceful transfer important?" Judge Barefoot Sanders Law Magnet teacher Patrick Lyons asked his students. "The idea is we are a democracy, it is our voice, our choice." 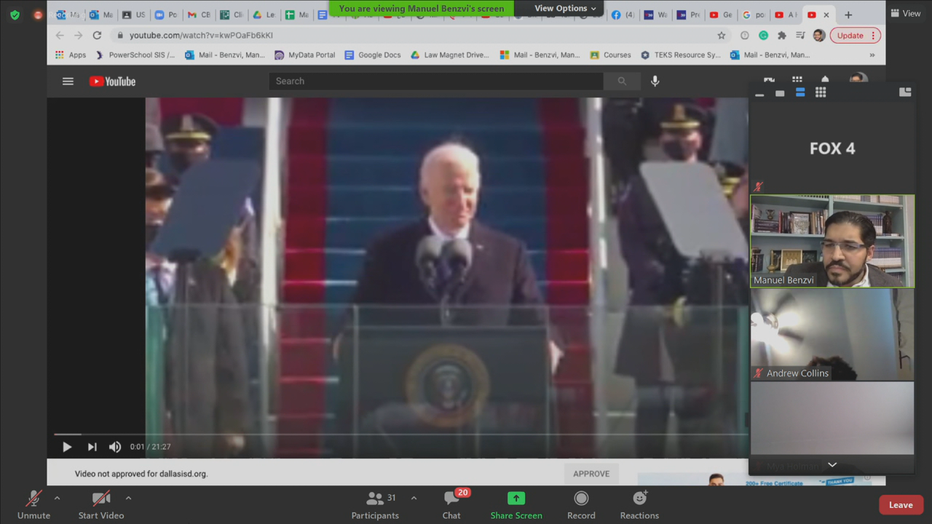 At Dallas ISD’s Law Magnet High School, two teachers knew this was a moment that could reach students better than any textbook.

"I want you to notice how many times he mentions the words democracy," Manuel Benzvi told his students.

For the students in the virtual classroom, it was a day they will always remember, for many reasons.

"Watching since 10 a.m. this morning, been interesting to watch even on mute. The last time we did this, I was in middle school, no pandemic, in a classroom. Didn't have opportunity to watch in between classes," student Sebastian Leon said.

"I have feelings that I did not expect it so early, and it should have come a long time ago. I’m grateful it happened now, and not later," she said. "To me, it shows a glimmer of hope to people like me in a house where my parents speak predominately Spanish and not a lot of English, that I could hold a position like that, if I tried hard enough like her."

There were several traditions the students did not get to witness this year.

They missed crowds filling the National Mall, the parade down Pennsylvania Avenue, and the typical handshake between an outgoing and incoming president.