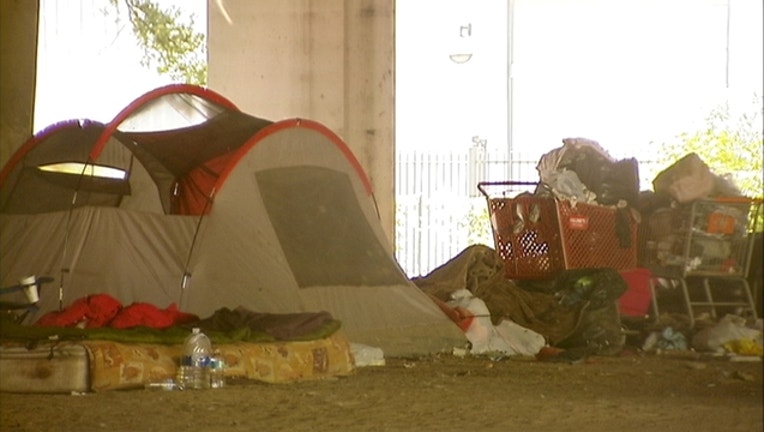 The Dallas City Council will be asked on Wednesday to commit more money to tackling the growing number of homeless camps in the city.

In a report to the Commission on Homelessness, the city said there are at least 65 camps in all corners of the city, including one large one near Fair Park. The council will be asked to make this issue a priority as the budget talks begin this fall.

Back in May, the mayor said the city needs to spend much more to get the homeless out of camps and into shelters or housing, adding to the list of other needs we are seeing come to head in Dallas.

Britton Banowsky chairs the Dallas Commission on Homelessness, formed by Mayor Mike Rawlings in response to the shutdown of a large homeless camp in May.

“It’s unacceptable for us to think that we can simply close an encampment, but not provide housing or shelter options for people who live there,” Banowsky explained.

Since May, the city closed a second camp after it grew so large that it became a public safety issue.

“The city is not spending very much at all on this. Less than one half of one percent of the city's allocation is against homelessness issues,” said Banowsky. “So we're not talking about a dramatic incremental increase, but a very modest one that in the long run is money very well spent.”

In its first report to the city council on Wednesday, the commission will recommend allocating money to house 300 homeless veterans and 300 more of the chronically homeless in a year.

Larry James, commission member and head of the non-profit, Citysquare, expects the commission will recommend asking for additional money from a bond package, plus between seven to ten million a year to tackle the problem, making the case that spending money on housing for homeless people will cost taxpayers less long-term.

“I can't predict what'll happen. But if the city of Dallas develops a political will defined by deep humanity and the appreciation of every life will do the right thing,” said James. “Which will also be the best thing economically.”

Commission members know much has changed in Dallas since the mayor declared the homeless issue would be a priority in May.

Since the ambush that killed five officers on July 7, there's been a renewed call to hire more officers and give them a raise. Banowsky said it All goes hand-in-hand.

“I’ve heard people say it’s going to be either the police or the homeless. I think supporting the homeless actually supports the police because if we're able to move people into housing, then we're able to alleviate the number of 911 calls and alleviate the number of overtime that our police officers are having to incur,” said Banowsky. “Because they're on the streets tracking down issues with unsheltered homeless.”

A Parkland/ Dallas County study estimated $40,000 per year is spent on emergency services for a chronically homeless person. The commission also plans to ask the council to back a formal protocol for closing homeless camps, giving social workers at least 45 days to slowly close them down.

The commission's first report is Wednesday. The final report is expected in November.