This year's valedictorian at Dallas ISD’s Sunset High School has a familiar name.

Noah Macias followed in the footsteps of his older brother and sister to finish first in his class.  He is the third valedictorian from his family in the past five years from Sunset High School.

Rising above the pandemic and so much more, Noah cleared a bar set high by his older brother Elijah, who was the Sunset valedictorian in 2019, and his sister Sophia, who was the first Macias to grab the distinction in 2017. 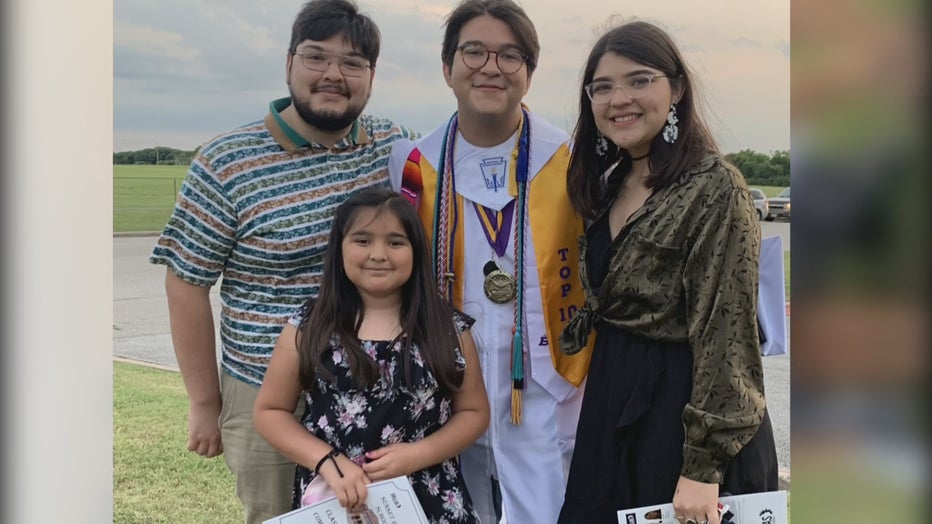 "This year, I was like I just need to graduate and be happier and stop worrying about my grades so much," Noah said. "But I definitely did have that voice in the back of my head that was like, ‘Come on. You are like right there!’"

"Do the best you can," Elijah told Noah. "If you did get valedictorian, that's great. That's a plus. But the primary focus is let’s get out of here. Let’s get to college."

"It was never really at the front of my mind to be number one, to be valedictorian," Sophia said. "I was just nerdy. I was just a nerd."

Noah is heading off to Stanford on a full scholarship.

All of the Macias siblings are first-generation college students coming up through DISD schools.

"It kind of just shows that it’s possible," Noah said.

"It’s not really about smartness," Elijah said. "It’s a lot about like personal drive, wanting to do it."

Mom Andrea Ramirez says she focused on nurturing her kids, not pushing them.

"I made sure that they were able to get to where they needed to go, give them the space, the quiet time," she said. "We just supported them. I didn't do anything for them. That's the crazy part. I was like, this is all on you."

The Macias family legacy at Sunset High School may not be over just yet. There's still one more younger Macias to go.

Noah will study biology and Mexican American studies at Stanford.

Elijah is getting a degree at UT in electrical and computer engineering.

"I really wanted to come back to my own community and enrich my own district," she said.

Needless to say, their parents couldn't be prouder.

"It’s awesome. It’s great," Ramirez said. "They have a great future ahead of them, and they are going to do wonderful."

Noah will be get getting a jump start on his Stanford experience. He is heading to California in the next few weeks for a summer program.