Dallas couple that contracted COVID-19 fight off virus together

The Dallas couple says they followed the orders to stay home except for essential trips. Still, they both ended up in the ICU. Both of them needed a machine to breathe for them.

DALLAS - A North Texas couple both contracted COVID-19. Neither knew how they got it.

The Dallas couple says they followed the orders to stay home except for essential trips. Still, they both ended up in the ICU. Both of them needed a machine to breathe for them.

Fortunately, they're now recovered, out of the hospital and are staying with their daughter. With lots of prayers and medical attention, they pulled through.

Lorenzo and Elba Banales are grateful to be alive. The couple was released Texas Health Dallas on Tuesday after both ended up in the ICU. Their daughter, Lorena, was there to greet them.

“It was stressful,” Lorena said. “Lots of sleepless nights just waiting with the phone, waiting to hear from the doctors.”

The couple, now recovering at their daughter's home, is recounting their terrifying journey. 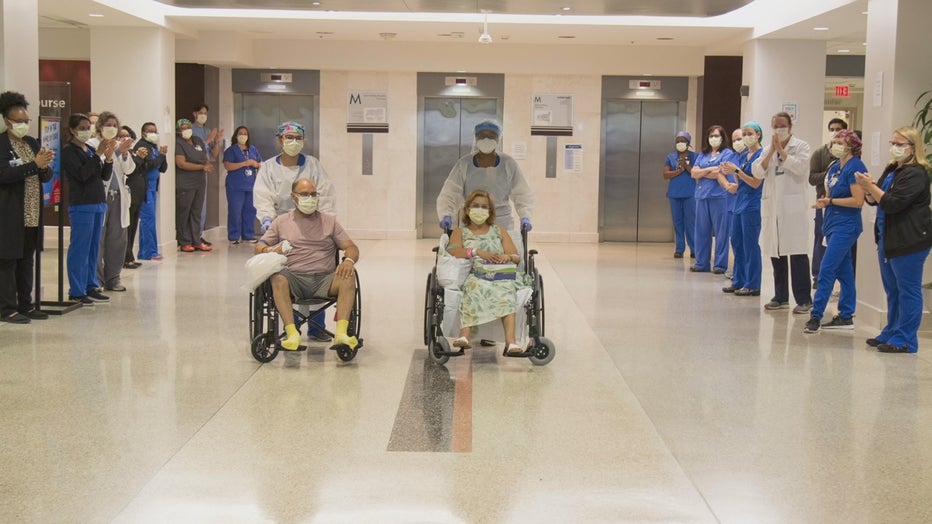 It started on April 11 when 56-year-old Lorenzo Banales felt so weak that his son had to take him to the hospital.

“I started feeling fevers in the night. Tired in the morning,” he said.

Lorenzo was put on a ventilator, where he would remain for 14 days.

On April 16, 52-year-old Elba Banales entered the same ICU as her husband.

“Every day I feel more sick because I have a lot of fever,” she recalled.

Elba was placed on a ventilator for four days. Both of them had tested positive for COVID-19.

“Once they went on the ventilator, it was just terrifying,” Lorena said.

Knowing that the couple hadn't seen one another for weeks, nurses at Texas Health Dallas wheeled Elba past her husband for a quick hello. It was a reassuring moment that both would be reunited soon.

“I think nurses and doctors, they are the heroes,” Lorenzo said.

The couple isn't sure how they contracted the virus. They'll remain at their daughter's home for the next two weeks as they continue to recover. They say they can't wait to hug their grandkids.