A three-alarm apartment fire in Fort Worth damaged a dozen units and displaced more than 30 people on Wednesday.

FORT WORTH, Texas - A three-alarm apartment fire in Fort Worth damaged a dozen units and displaced more than 30 people on Wednesday.

Firefighters spent nearly two hours on the fire at a large apartment complex in the 1700 block of Cherbourg Drive. That’s near Eastchase Parkway and Brentwood Stair Road.

It's unclear how it started, but gusty wind made it difficult to contain.

Fire crews were engulfed by the billowing smoke while they fought it.

There are 31 people who are out of their homes Wednesday night after the apartment building caught fire.

Thankfully, no one was injured.

One official with the Fort Worth Fire Department said a three-alarm fire is rare, and he could only remember one in the last year.

“It was full of smoke, just burning your eyes, you can’t breathe, you can’t see anything,” said Meaghan Jackson.

Jackson and her family were inside their two-story East Fort Worth apartment when a neighbor banged on their door yelling about a fire.

“When they came to us, you could smell it already,” Jackson recalled.

Jackson grabbed her 2-year-old daughter, Phoenix, while her sister, Jazmin Buford, woke their mother, Maryilin, from a nap upstairs.

“At that moment, that’s when we seen all the smoke coming out the chimney and stuff like that,” Buford recalled.

Buford recorded cell phone video of firefighters searching for the flames, and they eventually found them above the ceiling of a first floor apartment.

“Quickly, the chief on scene called for a second alarm. He realized that there was a lot of fire. That we were going to need a lot of manpower,” Fort Worth FD spokesman Mike Drivdahl said.

The battalion chief ended up calling a third alarm, bringing a total of 65 firefighters to the scene. 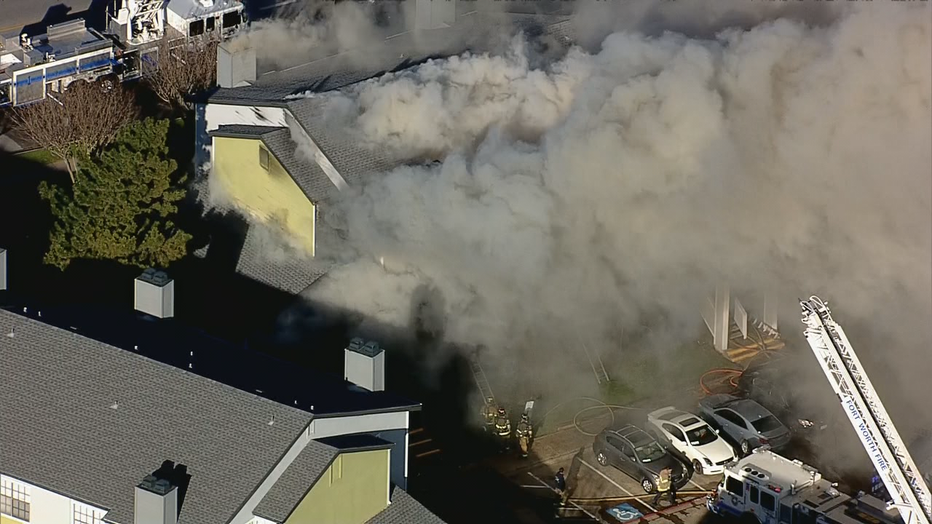 Images from SKY4 showed ladder crews who were downwind disappear in the clouds of smoke as they tried to attack the flames from above.

Drivdahl said the corner location of the apartment is where the fire started, and that made it difficult to get to the flames, which were fueled by the strong winds.

“The wind was obviously going to be a factor on this one. It was blowing out of the north. Pushing through this apartment complex,” Drivdahl explained.

After Buford and her family escaped, she said she went back inside to save the family cat, Sophia.

They watched firefighters put out the flames, while wondering what’s left of their belongings.

“I’m appalled ‘cause I actually moved over here. I had my first apartment and I just want to know where it came from and how it began to get so big,” Buford said.

There were 24 adults and nine children displaced after 12 apartments were damaged.

Buford is grateful no one was hurt.

“I’m blessed and thankful that our neighbor actually just came and told us because who would know what would have happened if she hadn’t told us,” Buford added.

The apartment complex is helping those affected by the fire by finding empty apartments for them.

They are investigating whether or not the smoke detectors were working.