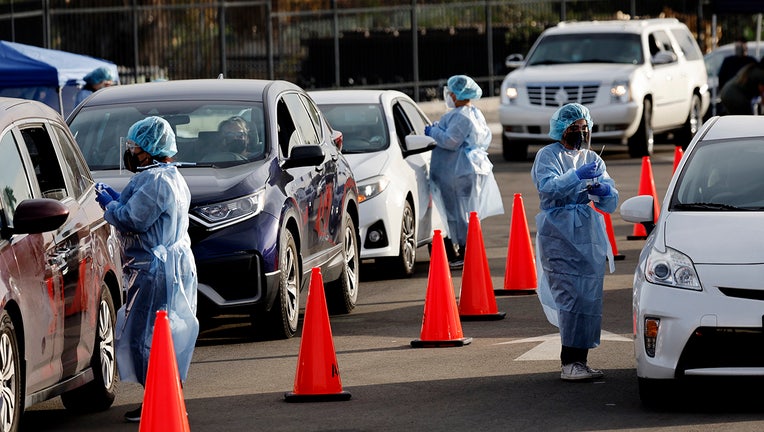 WASHINGTON - With the brutal omicron wave rapidly loosening its grip, new cases of COVID-19 in the U.S. are falling in 49 of 50 states, even as the nation's death toll closes in on another bleak round number: 900,000.

The number of lives lost to the pandemic in the U.S. stood at over 897,000 as of midday Friday, with deaths running at an average of more than 2,400 a day, back up to where they were last winter, when the vaccine drive was still getting started.

New cases per day have tanked by almost a half-million nationwide since mid-January, the curve trending downward in every state but Maine. And the number of Americans in the hospital with COVID-19 has fallen 15% over that period to about 124,000.

Deaths are still on the rise in at least 35 states, reflecting the lag time between when victims become infected and when they succumb.

But the trends are giving public health officials hope that the worst of omicron is coming to an end, though they caution that things could still go bad again and dangerous new variants could emerge.

Los Angeles County may end outdoor mask requirements in a few weeks, Public Health Director Dr. Barbara Ferrer said Thursday. But that is unlikely to happen before the Feb. 13 Super Bowl, which will draw as many as 100,000 people to SoFi Stadium in Inglewood.

Ferrer said COVID-19 infections and hospitalizations in California’s biggest county are falling, and deaths may start to drop as well.

"Post-surge does not imply that the pandemic is over or that transmission is low, or that there will not be unpredictable waves of surges in the future." she warned.

Arizona has also seen its daily case and hospitalization numbers decline, though deaths are still on the rise, climbing from average of about 61 a day last week to almost 79 as of Tuesday.

"We have reason to be hopeful, but we are by no means out of the woods," Elizabeth Jacobs, a University of Arizona professor of epidemiology, said Thursday on Twitter.

Iowa Gov. Kim Reynolds said she is calling an end to the state's coronavirus public health emergency, a move that will limit the release of health data.

The step reflects the governor’s long-held belief that it is time to get past pandemic restrictions and move toward the point when COVID-19 becomes, like the flu, a manageable part of everyday life.

Overall, new cases in the U.S. have plummeted from a record-obliterating average of more than 800,000 a day in mid-January to about 357,000.