President Biden says 500 million doses of the COVID-19 vaccine produced in the United States will be sent out to countries around the world this year and intro early 2022.

ST. IVES, England (AP) - President Joe Biden called on global leaders Thursday to join him in sharing coronavirus vaccines with struggling nations around the world after he promised the U.S. would donate 500 million doses to help speed the pandemic’s end and bolster the strategic position of the world's wealthiest democracies.

Speaking in England before the summit meeting of the Group of Seven, Biden announced the U.S. commitment to vaccine sharing, which comes on top of 80 million doses he has already pledged by the end of the month. He argued it was in both America's interests and the world's to make vaccination widely and speedily available everywhere.

"We’re going to help lead the world out of this pandemic working alongside our global partners," Biden said, announcing that on Friday the G-7 nations would join the U.S. in outlining their vaccine donation commitments.

It's a remarkable turnaround of America's standing from a year ago, when the U.S. was the deadliest hotspot of the COVID-19 pandemic, forcing the cancellation of the G-7 summit it was due to host. Now, the country is emerging as a model for how to successfully recover from more than 15 months of global crisis.

"In times of trouble, Americans reach out to offer help," Biden said, saying the U.S. doses would "supercharge" the global vaccination campaign. "Our values call on us to do everything that we can to vaccinate the world against COVID-19.″

He added the doses would be shared "with no strings attached" or "pressure for favors."

"We're doing this to save lives, to end this pandemic, and that's it," he said.

The U.S. commitment is to buy and donate 500 million Pfizer doses for distribution through the global COVAX alliance to 92 lower-income countries and the African Union, bringing the first steady supply of mRNA vaccine to the countries that need it most. A price tag for the 500 million doses was not released, but the U.S. is now set to be COVAX's largest vaccine donor in addition to its single largest funder with a $4 billion commitment.

Biden had faced mounting pressure to outline its global vaccine sharing plan, especially as inequities in supply around the world have become more pronounced and the demand for shots in the U.S. has dropped precipitously in recent weeks.

The global alliance has thus far distributed just 81 million doses and parts of the world, particularly in Africa, remain vaccine deserts. White House officials hope the ramped-up distribution program can be the latest example of a theme Biden plans to hit frequently during his week in Europe: that Western democracies, and not rising authoritarian states, can deliver the most good for the world.

White House officials said the 500 million vaccines will be shipped starting in August, with the goal of distributing 200 million by the end of the year. The remaining 300 million doses would be shipped in the first half of 2022.

"We’re in this position because we’ve had so much success at home vaccinating Americans," White House press secretary Jen Psaki told CBS News on Thursday.

After leading the world in new cases and deaths over much of the last year, the rapid vaccination program in the U.S. now positions it among the leaders of the global recovery. Nearly 64% of adults in the U.S. have received at least one vaccine dose and the average numbers of new positive cases and deaths in the U.S. are lower now than at any point since the earliest days of the pandemic.

The Organization for Economic Cooperation and Development last week projected that the U.S. economy would grow at a rate of 6.9% this year, making it one of the few nations for which forecasts are rosier now than before the pandemic.

U.S. officials hope the summit will conclude with a communique showing a commitment from the G-7 countries and nations invited to participate to do more to help vaccinate the world and support public health globally.

National security adviser Jake Sullivan told reporters Wednesday that G-7 leaders are "converging" around the idea that vaccine supply can be increased in several ways, including by countries sharing more of their own doses, helping to increase global manufacturing capacity and doing more across the "chain of custody" from when the vaccine is produced to when it is injected into someone in the developing world.

British Prime Minister Boris Johnson wrote in The Times of London newspaper that it was now time for wealthy countries to "shoulder their responsibilities" and "vaccinate the world," although his own country has yet to send any doses abroad or announce any solid plan to share vaccines. Johnson indicated Britain had millions of doses in surplus stocks. 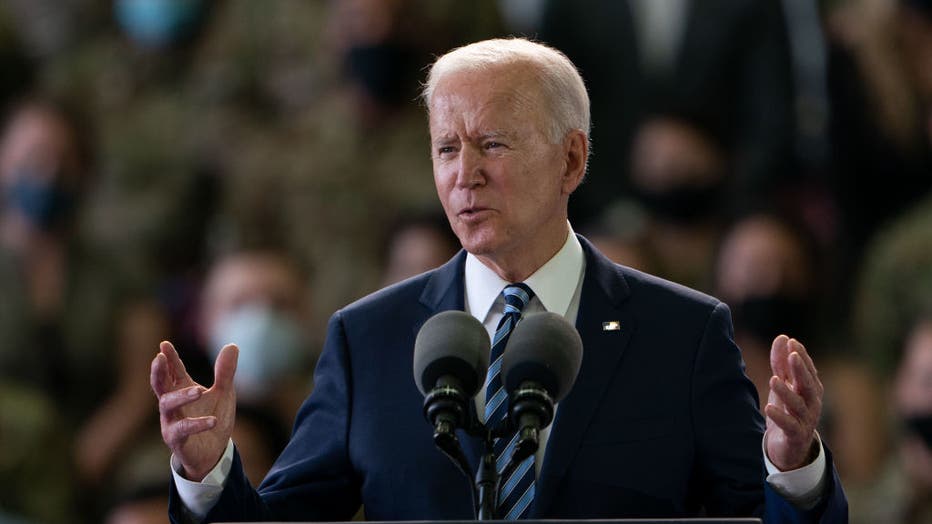 President Joe Biden addresses US Air Force personnel at RAF Mildenhall in Suffolk, ahead of the G7 summit in Cornwall, on June 9, 2021 in Mildenhall, England. (Photo by Joe Giddens - WPA Pool/Getty Images)

Officials say a quarter of that excess will be kept in reserve for emergencies and for the U.S. to share directly with allies and partners, including South Korea, Taiwan and Ukraine.

Sullivan noted that Biden has previously committed to turning the U.S. into a modern day "arsenal of democracies" for vaccines, but that it also has health reasons for spreading vaccinations — preventing the rise of potentially dangerous variants — and geostrategic ones as well.

China and Russia have shared, with varying success, their domestically produced vaccines with some needy countries, often with hidden strings attached. Sullivan said Biden "does want to show — rallying the rest of the world’s democracies — that democracies are the countries that can best deliver solutions for people everywhere."

Biden’s decision to purchase the doses, officials said, was meant to keep them from getting locked up by richer nations that have the means to enter into purchasing agreements directly with manufacturers. Just last month, the European Commission signed an agreement to purchase as many as 1.8 billion Pfizer doses in the next two years, a significant share of the company’s upcoming production — though the bloc reserved the right to donate some of its doses to COVAX.

Global public health groups have been aiming to use the G-7 meetings to press wealthier democracies to do more to share vaccines with the world. Biden's plans drew immediate praise.

Tom Hart, acting CEO at The ONE Campaign, a nonprofit that seeks to end poverty, said Biden’s announcement was "the kind of bold leadership that is needed to end this global pandemic."

"We urge other G-7 countries to follow the U.S.’ example and donate more doses to COVAX," he added. "If there was ever a time for global ambition and action to end the pandemic, it’s now."

Others have called on the U.S. to do even more.

"Charity is not going to win the war against the coronavirus," said Niko Lusiani, Oxfam America’s vaccine lead. "At the current rate of vaccinations, it would take low-income countries 57 years to reach the same level of protection as those in G-7 countries. That’s not only morally wrong, it’s self-defeating given the risk posed by coronavirus mutations."

Biden last month broke with European allies to endorse waiving intellectual property rules at the World Trade Organization to promote vaccine production and equity. But many in his own administration acknowledge that the restrictions were not the driving cause of the global vaccine shortage, which has more to do with limited manufacturing capacity and shortages of delicate raw materials.