A COVID-19 outbreak among the renegade Texas Democrats in D.C has jeopardized their chances of meeting with President Joe Biden on voting rights.

WASHINGTON, D.C. - A COVID-19 outbreak among the renegade Texas Democrats in D.C has jeopardized their chances of meeting with President Joe Biden on voting rights.

Five of the 55 members tested positive late last week and over the weekend.

The party leaders say all members are fully vaccinated. At least one member is now self-isolating until he tests negative.

The group held a virtual meeting with Latino activists and labor rights organizers and Monday about creating bipartisan voting legislation.

"We actually care about bipartisan policy. We want elections to be more accessible and safe," said State Rep. Rafael Anchia (D-Dallas). "And as a result, we're going to be hearing from experts and bringing those ideas back to Texas. 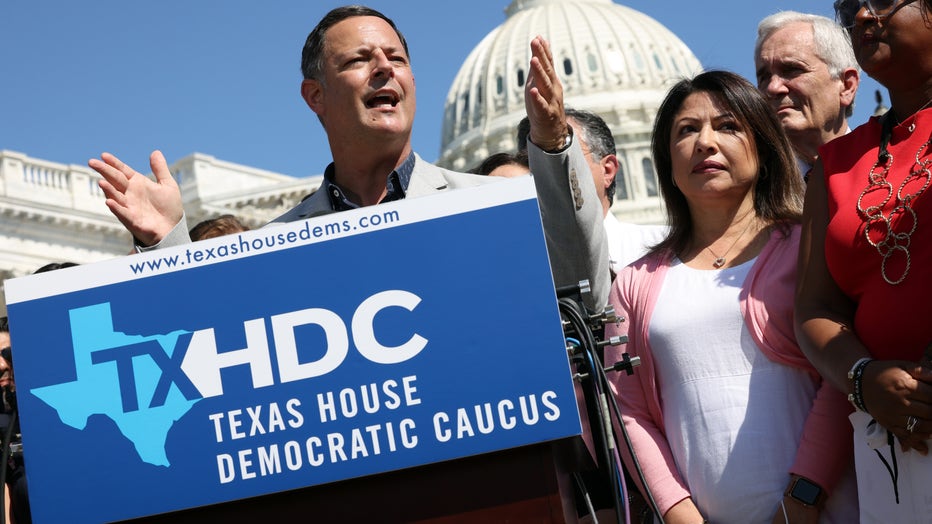 The Democrats met last week with Vice President Kamala Harris. Her office says she was not in close contact with the infected Texas delegates.

The Democrats also wrote a letter to President Biden urging him to meet with them, but no date has been set.

The Texas Dems say the only difference is some things have moved to Zoom rather than face-to-face.

State Representative Trey Martinez Fisher (D-San Antonio) is fully vaccinated but is positive with COVID-19 in D.C. He is now self-isolating.

"I have a low-grade fever. My routine is normal," he said. "When I tested positive, I had no idea."

Fisher is one of five that we know of now with COVID-19.

"I think my colleagues are on the mend as well nobody has any serious symptoms," he said. "We're taking this very, very seriously."

State rep Gene Wu (D-Houston) posted a tweet with a picture of the Democrats on a plane without masks leaving Texas last week. He wrote, "let our mistake be the object lesson all of us had been fully vaccinated since March. We got complacent because we felt safe."

Dr. Mark Casanova with Baylor Scott & White says while covid vaccines offer better protection against the virus than the seasonal flu shot, it is not 100%.

"It speaks directly to the effectiveness of the delta variant in its spreading," he said. "While severe infection of the risk of dying is immensely reduced with the COVID-19 vaccine, it does not mean that you can't get COVID-19."

Grand Prairie Democrat and Caucus Chair Chris Turner says rapid testing revealed the infections. All of them had mild or no symptoms.

"During the entirety of the trip, we've been observing all CDC guidance, including going above and beyond," Anchia said. "We test every morning."

Democrats in the nation’s capital started a weeklong virtual voting rights conference flagged with questions about the breakthrough COVID cases and whether it’s hampering their efforts in D.C. with Texas Gov. Greg Abbott threatening a second special session immediately if legislators don’t return.

"We'll cross that bridge when we come to it," Turner said. "Our focus right now is on this session and killing these bills this session and this intervening time to implore the U.S. Senate to get federal voting rights legislation to President Biden’s desk immediately."

The Texas Democrats will be in a cable town hall meeting Monday night. Supporters of Gov. Abbott will air commercials inside that town hall.