Fauci says US should stick with current 21-day and 28-day vaccine intervals for Pfizer, Moderna

Dr. Anthony Fauci said the U.S. should stick with the data showing optimal results by boosting the Pfizer vaccine at 21 days and Moderna at 28 days, despite studies from AstraZeneca about prolonging the interval.

Amid the push to get the COVID-19 vaccine to many as possible to stem the pandemic, a new variant of the coronavirus that exploded in Brazil and has since been reported in the U.S. is causing concern among scientists over its resurgence in one particular city.

The fast-spreading Brazilian variant, known as P.1, was first identified in four travelers from the South American country who were tested at an airport outside of Tokyo. It has since been discovered in a patient in Minnesota — becoming the first known case documented in the U.S. Minnesota health officials said the person had recently traveled to Brazil.

New versions of viruses — called variants — regularly emerge, and viruses are constantly mutating. Health officials have had concerns about P.1 and its potential for reinfection or to be more transmissible, although more research is needed.

The U.S. Centers for Disease Control and Prevention added P.1 to its list of emerging SARS-CoV-2 variants, in addition to two others drawing global attention: B.1.1.7, the U.K. variant, and B.1.351, the South African variant. Both have also been detected in the U.S.

The CDC says P.1 contains a set of mutations that "may affect the ability of antibodies (from natural infection or vaccination) to recognize and neutralize the virus," but notes additional studies are needed.

Worry about the new variant among infectious disease researchers seems to stem from a troubling resurgence in Manaus, the largest city in the Amazon region of Brazil.

The P.1 variant was first detected in samples from Manaus in December. The researchers, who published their findings on Jan. 12, reported the strain had been detected in 42% of the samples tested and noted the cases in Japan among the individuals who had traveled to Brazil.

Additional research estimated that as much as 76% of the population in Manaus had already been infected with COVID-19 by October 2020, putting it above the theoretical herd immunity threshold, according to the authors.

"The most concerning thing about P.1 is Manaus, because frankly, the virus has no business causing a surge of infections, hospitalizations and deaths there. It already did. It did so toward the middle of last year," said Dr. William Hanage, a Harvard University infectious-disease researcher.

The Amazonas state, which encompasses Manaus, has recorded at least 271,000 cases of the virus since the start of the pandemic — suffering a surge in the spring of 2020. The state is now in the midst of a devastating resurgence of infections, crippling Manaus’ healthcare system and creating severe oxygen shortages. 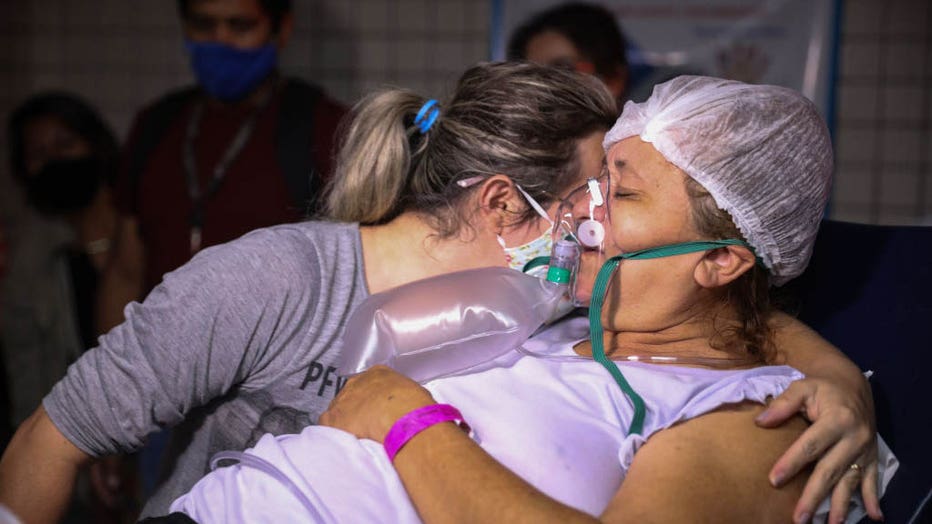 A woman wearing a mask hugs a COVID-19 patient who is to be flown out from Joao Lucio Hospital in Manaus to a hospital in Maceio, Alagoas state, amid a shortage of public hospital and ICU beds, on Jan. 20, 2021. (Photo by Lucas Silva/picture alliance

"If 75% of the population has some immunity, then that should be enough to stop any future surge. The fact that the surge has been seen, the fact that hospitalizations and deaths in January have been higher than previously, is obviously deeply worrying," Hanage added.

A study published Jan. 27 in the The Lancet looked at possible explanations regarding the COVID-19 resurgence in Manaus despite exceeding the threshold for herd immunity, which included the possibility of waning immunity. But the researchers said this alone is "unlikely to fully explain the recent resurgence," especially since Manaus went into a stricter lockdown with decreased mobility from mid-November through late December. Other possible explanations were higher transmissibility with the P.1 variant or that it contains mutations that enable it to evade immunity, leading to reinfection.

The possibility that reinfection with P.1 is easier than with other viruses is "plausible," Hanage said — as well as the possibility that the variant could be more transmissible than its ancestors. "But we don’t know that that’s the case yet. It’s just one of the things that’s consistent with the observed data," he added.

One specific mutation, called D614G, is shared by all three of the coronavirus variants. Research suggests this mutation gives the variants the ability to spread more quickly than the predominant viruses, according to the CDC. Another key mutation shared by the Brazil variant and the South African variant, called E484K, may help the virus evade antibodies, research has suggested.

Last week, CDC Director Dr. Rochelle Walensky said the U.S. "should be treating every case as if it's a variant," saying the U.K. variant had been confirmed in at least 379 cases in 29 states, as of Jan. 27. The CDC has warned that the highly-transmissible variant could become the dominant strain found in the U.S. and lead to a spike in cases and deaths, further straining the healthcare system.

Walensky said public health officials remain concerned about the variants and "are rapidly ramping up surveillance and sequencing activities" to closely monitor and identify them, which is needed to stay ahead of the issue.

"There have been recent positive moves, and there has been an increase, but it has not been at the level that would be required in order to catch the imports and know about things early enough to make a difference," Hanage said of genetic sequencing in the U.S. "We’re moving in the right direction, but we still have a ways to go."

Vaccines against the new variants

More serious strains of the virus that has killed more than 447,000 Americans have created a new urgency to speed up vaccinations. The White House said 1 million doses will be distributed to some 6,500 pharmacies across the country next week, and it has boosted the weekly allocation of vaccines sent directly to states and territories.

Experts have said they expect current vaccines to work against the variant and play a much-needed role in the worldwide crisis, despite recent findings that the shots may not be as effective against the fast-spreading variant first detected in South Africa.

Hanage said it’s reasonable to suggest that some of the virus mutations "might reduce the efficacy of the vaccines a bit," but called the amount of immunity shown to be generated by the vaccines "really impressive."

"Vaccination is expected to be extremely helpful and still the cornerstone of what we should be doing," he said.

Dr. Anthony Fauci, the nation’s top infectious-disease expert, has called on Americans to get the vaccine as soon as they’re eligible to prevent further mutations. He added that vaccine makers should be "nimble to be able to adjust readily" to make tweaks to the vaccines if needed.

"Viruses cannot mutate if they don’t replicate," Fauci said. "And if you stop their replication by vaccinating widely and not giving the virus an open playing field to continue to respond to the pressures that you put on it, you will not get mutations."

In addition to getting vaccines, people should continue wearing a mask in public and other social distancing measures as the variants continue to circulate.

"The bottom line is: If you have been doing things which are high risk, they’re going to be higher risk in the presence of these variants," Hanage said.