The head of the local council in Borodyanka surveyed extensive damage following the withdrawal of Russian forces from the Kyiv region in footage released on April 5, 2022. Credit: General Staff of the Armed Forces of Ukraine via Storyful

WASHINGTON - Congress voted overwhelmingly Thursday to suspend normal trade relations with Russia and ban the importation of its oil, ratcheting up the U.S. response to Russia's invasion of Ukraine amid reports of atrocities.

House action came after the Senate approved the two bills with 100-0 votes. The measures now go to President Joe Biden to be signed into law.

Lawmakers overwhelmingly support the substance of the two bills, but they had languished for weeks in the Senate as lawmakers worked to hammer out the final details.

Biden has already taken executive action to ban Russian oil, liquefied natural gas and coal to the United States. The legislation puts the effort into law. 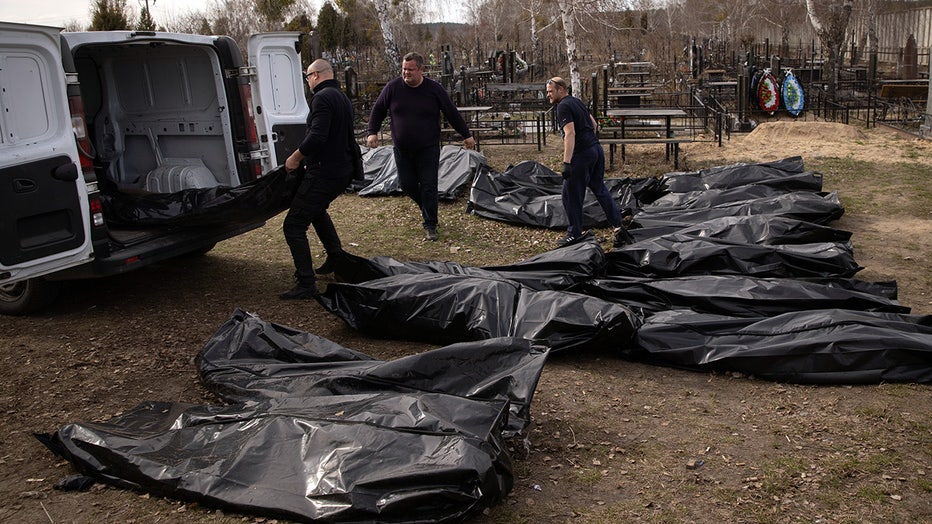 Cemetery workers unload bodies of civilians killed in and around Bucha before they are transported to the morgue at a cemetery on April 07, 2022 in Bucha, Ukraine. (Photo by Chris McGrath/Getty Images)

Rep. Richard Neal, D-Mass., said it was important to take action because innocent Ukrainians were being slaughtered even as lawmakers were meeting.

"We have no time to waste and must immediately further punish Vladimir Putin," Neal said. "What we have witnessed in Bucha over the course of the last 72 hours alone more than justifies the positions we have taken in the past and to be more assertive and aggressive going into the future."

Senate Majority Leader Chuck Schumer, D-N.Y., announced late Wednesday a breakthrough in negotiations to bring the bills up for votes before lawmakers travel back to their home states and congressional districts for two weeks. Some lawmakers said that the failure to take final action on the bills was sending the wrong message to allies and to Russia.

"Now, I wish this could have happened sooner, but after weeks of talks with the other side, it’s important that we have found a path forward," Schumer said.

Schumer described the images coming out of Ukraine as the war drags as "pure, pure evil. Hundreds of civilians murdered in cold blood." 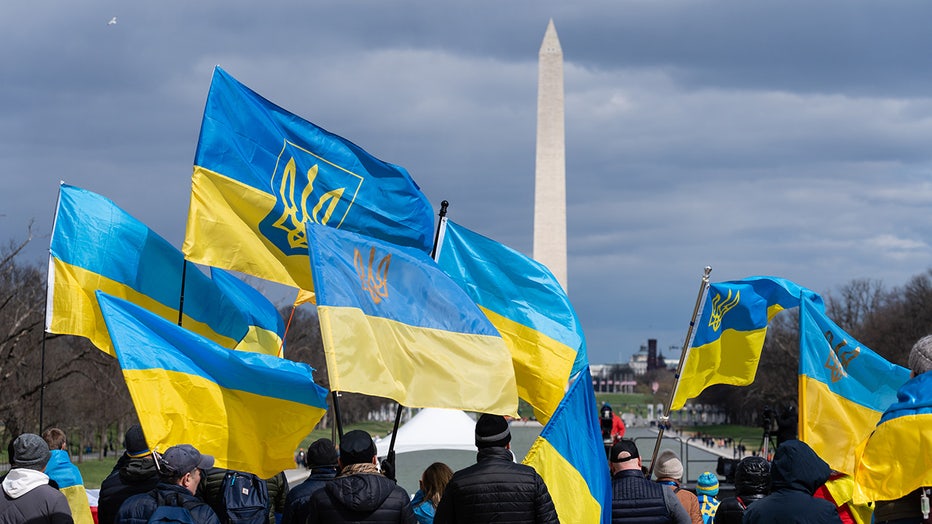 Demonstrators hold flags during a rally against Russia's invasion of Ukraine on the National Mall in Washington, D.C., U.S., on Sunday, March 27, 2022. (Eric Lee/Bloomberg via Getty Images)

While there was overwhelming support for suspending preferential trade treatment for Russia, Sen. Rand Paul, R-Ky., blocked speedy consideration of the bill over concerns that its language on who can be sanctioned for human rights abuses is too broad, leaving it ripe for abuse. A few other Republicans had voiced similar concerns.

Schumer opted to let senators work behind the scenes on language that lawmakers from both parties and the White House could accept, rather than chew up floor time to overcome the filibuster.

Sen. Ben Cardin, D-Md., said, practically speaking, the impact of the delay on the trade bill is minimal "because there’s virtually no trade right now coming in from Russia." Still, he said passage of the bill is key.

"Messaging is important here and showing action is important," Cardin said. "You’ve got the Ukrainians on the battlefield every day. The least we can do is get these bills passed."

Lexi Pendola, 17, started teaching Ukrainian children how to speak English via Zoom about a year ago. When the war broke out, she shifted her focus to helping the students with basic necessities through a GoFundMe, https://www.gofundme.com/f/qeank-help-for-ukraine. Pendola explains the needs of the students and how their bravery has inspired her in her own endeavors.

The bills also provides the president with the authority to return normal tariff treatment for Russia as well as resume trade in Russian energy products subject to certain conditions.

While Russian oil makes up only a small part of U.S. imports, it carries a high price for lawmakers in Congress who viewed the ban as a moral test in blocking an economic lifeline for Putin’s regime.

"Thanks to Congress for its partnership and leadership in making Putin a global economic and financial pariah," Sullivan tweeted.

The White House says that sanctions the U.S. and more than 30 other nations have already enacted have stung the Russian economy. It said that experts are now predicting Russia’s GDP will contract up to 15% this year and that inflation is already spiking above 15%. More than 600 private sectors companies have already left the market.

"Russia will very likely lose its status as a major economy, and it will continue a long descent into economic, financial, and technological isolation," the White House report said.