Many community members in Fort Worth said they're tired of waiting for change, and they want an end to racism now.

FORT WORTH, Texas - Many community members in Fort Worth said they're tired of waiting for change, and they want an end to racism now.

Activists said breaking down the barriers of racism will take all of us.

There are now more efforts to make sure that takes place.

As people walk along Fort Worth's Main Street, they will leave with a new message of hope.

“Everybody is here working and coming together as one," activist Melinda Hamilton.

End Racism Now has been painted between 8th and 9th streets, just steps away from a Martin Luther King Jr. memorial plaque, the site of where the civil rights leader delivered a sermon in 1959.

Saturday's mural project was put together by one community member fighting for change.

“Were the 13th largest city in the United States of America, we the citizens of Fort Worth want to actively work to break down the barriers of systemic racism, and that’s why the term is End Racism Now, rather than just Black Lives Matter. We wanted to make an action statement that said let’s do something,” mural project organizer Deborah Peoples said. 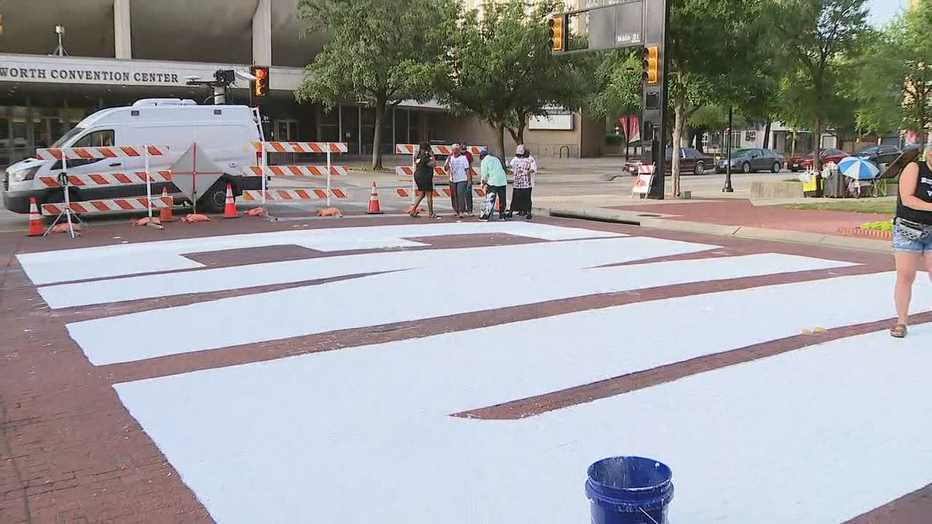 Following recent protests, hundreds of people - of all races - were compelled to take part in that action, adding their names to the mural as a sign of solidarity.

“It’s about the community all being engaged and the community playing a part in this statement,” mural artist Sedrick Huckaby said.

That's the reason Goode said she brought her son to see that with his own eyes.

“To give that example, as well to our children, everyone is equally important and loved and beautiful,” she said.

Others brought their children to show that by working together, we can make sure our nation's future is not the same as our past.

“Even just having end racism now on the streets in Fort Worth it’s not something any of us could have imagined would’ve happened 10 years ago or even a year ago, and so it’s good to see even the little steps that are starting to change,” Kacey Bess said.

The plan is to have the mural done by Saturday night.

Volunteers will be back on Main Street Sunday so that even more people can sign their name.