Fort Worth becomes first city in the U.S. to mine bitcoin

The city of Fort Worth will be the first U.S. city to mine cryptocurrency. On Tuesday, council members voted on a resolution to encourage the development of the industry. In return, the city will be given three crypto mining computers.

FORT WORTH, Texas - The city of Fort Worth will be the first U.S. city to mine cryptocurrency.

On Tuesday, council members voted on a resolution to encourage the development of the industry. In return, the city will be given three crypto mining computers.

The machines from the Texas Blockchain Council are reportedly worth more than $2,000 each. They will run continuously on a private network in the city’s data center at city hall for six months.

"I love what’s happening the last 24 hours," said Fort Worth Mayor Mattie Parker. "People are already talking about Fort Worth that have never heard of our community before."

A few hours after the voter, the mayor plugged in the three donated machines with software that will power the bitcoin mining process. 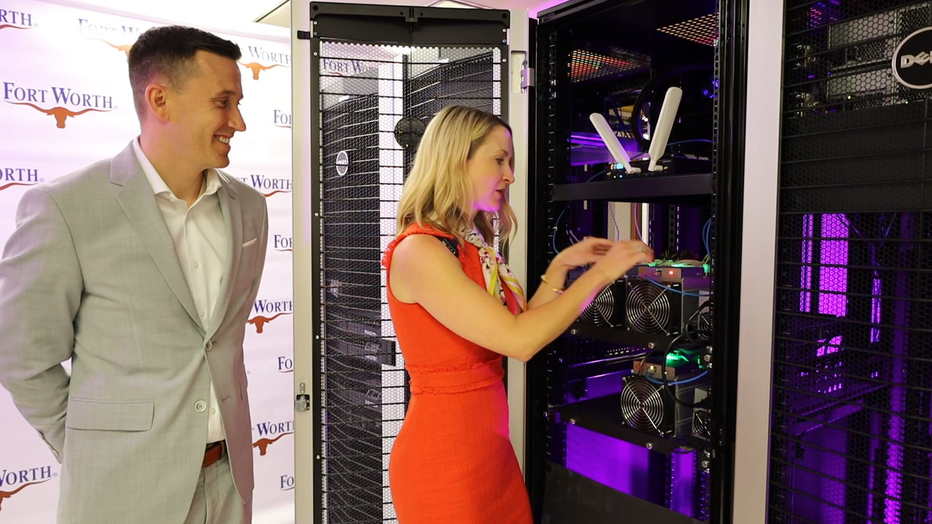 To summarize the mining process, the computers power high-speed processes to crunch complex mathematical algorithms. When successful, a machine earns the rights to new units of cryptocurrency.

Although large-scale mining operations require massive amounts of power, Parker insists the donated machines make the Fort Worth venture "no cost" to taxpayers and is positioning the city with future business it could attract.

"I think for people to understand what we’re trying to accomplish here; I know that the big focus is on mining bitcoin, right? But for us, it’s really secondary. You have to understand every major tech company that’s emerging right now and has been on the forefront of what’s next," she said. "They’re talking about cryptocurrency. The city of Fort Worth wants to learn from both other private sector partners and for ourselves for the next six months."

The negatives from bit mining critics include the typical amount of energy required to power the machines. Parker says this pilot program does not amount to significant usage.

"These machines are small or small footprint. It’s the equivalent of a household vacuum cleaner. So the big picture for us really is about the future of technology," Parker said. "We figured out this is more than about mining bitcoin. This is about being a tech-friendly innovative city on the forefront of what’s next in our economy and across the globe."

But even though everybody’s talking about Bitcoin, not everybody understands exactly what it is.

Fort Worth becomes first city in the U.S. to mine bitcoin

Even though everybody’s talking about Bitcoin, not everybody understands exactly what it is.

As TCU Entrepreneurship Professor Michael Sherrod explains that digital currency or cryptocurrency is hidden in cyberspace.

"Bitcoin is a digital currency. It exists only online," he said. "The inventor put the bitcoin out on the net, and you have to solve crypto logical problems in order to find bitcoin."

It’s literally a treasure hunt, and it takes powerful, high-speed processors to do the searching.

"The computers that you use have to solve problems continuously, this is why they use up so much electricity," Sherrod explained.

For the next six months, three bitcoin mining machines will run 24/7 in a climate-controlled data center inside of city hall. But the city insists each one will only use energy equivalent to a household vacuum cleaner.

"It’s an incredibly innovative thing to do. There’s no question about that," Sherrod said.

He says an alternative pool of currency may come in handy for the city during a disaster or an emergency.

"It could be used as a hedge if there’s another pandemic for instance and sales taxes fall," Sherrod said. "They could use it as a hedge to pay for city services and that sort of thing."

Cryptocurrency is a quickly growing industry.

Earlier this year, President Joe Biden signed an executive order directing government agencies to research cryptocurrency and the potential role the federal government might have in regulating it.

RELATED: Biden to sign executive order on cryptocurrency this week

And in April, the Dallas Cowboys became the first team in the NFL to create a sponsorship with a crypto company.

Fort Worth’s bitcoin mining operation is expected to last for six months. After that, the city will re-evaluate the program.