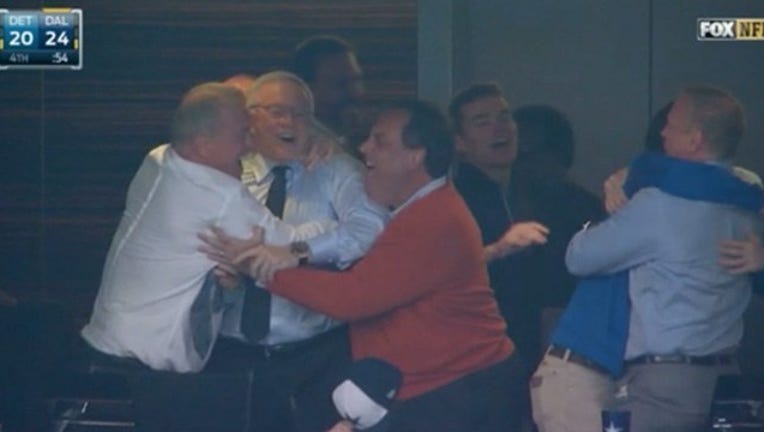 Gov. Chris Christie will be attending this weekend's Dallas Cowboys game in Wisconsin -- and paying for it on his own dime.

Christie has faced ethical questions since his office disclosed that Cowboys owner Jerry Jones had been paying for Christie's box seats and private jet flights, as well as outrage from Eagles, Jets and Giants fans in New Jersey furious about his lifelong Cowboys fandom.

A spokesman for the potential presidential contender confirmed the governor will attend this weekend's playoff game between his beloved Dallas Cowboys and the Green Bay Packers at Lambeau Field.

"Not wanting to risk breaking the team's 5-0 streak by messing with karma, Governor Christie, his orange sweater and his son Andrew will all travel to Lambeau Field this weekend to attend the game against the Green Bay Packers," spokesman Michael Drewniak said in a statement.

Jones has referred to Christie as his team's "mojo" because the team has won the last five games Christie has attended wearing his good luck sweater. Another Christie spokesman said the governor would sit in the owner's box again with Jones this weekend.

The Cowboys co-own a company that has a contract with the Port Authority of New York and New Jersey, which Christie controls along with New York Gov. Andrew Cuomo. The office has said the two became friends after that.

The governor's office has insisted the gifts are permitted under the state's ethics rule because of an executive order that permits Christie to receive gifts from personal friends. But Drewniak said Christie will pay out of his own pocket this time.

"The Governor will be paying for travel and tickets for himself, his sweater and his son to make sure we keep silliness out of the football season," he said.

Christie and Wisconsin Gov. Scott Walker, a potential 2016 rival, have been trading barbs on social media about the game.