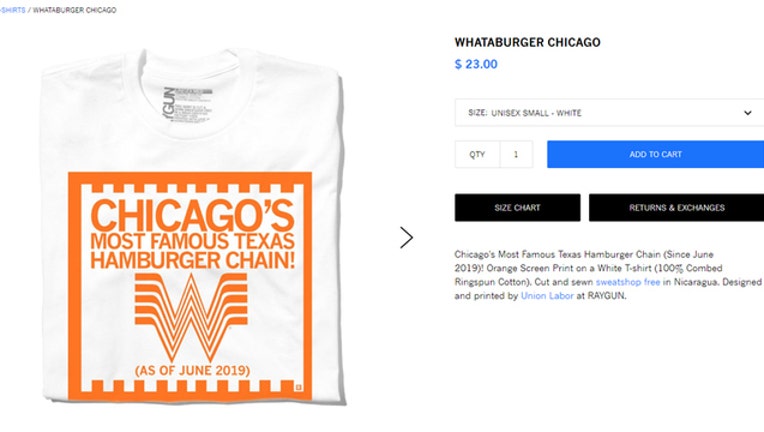 Texans are still furious that the family owners of Whataburger have sold the iconic fast food chain to a Chicago-based investment firm. Now, a new T-shirt being sold in the Windy City is rubbing it in.

Raygun, a Midwestern t-shirt company, is selling an orange and white T-shirt mocking upset Texans over the sale at its Chicago location and online that reads “Chicago’s Most Famous Texas Hamburger Chain (as of June 2019).”

The design features the ‘W’ Whataburger logo and is in the shape of the plastic order numbers the chain hands out to diners.

“Now that Whataburger belongs to Chicago, we celebrate with a shirt,” Raygun said on an Instagram post announcing the shirt’s release. In a follow up post, the shirt maker said, “Chicago came and took it.”

In the week-and-a-half since the sale was announced, Texans have taken to social media in mourning and worried about potential changes to Whataburger. Houston Texans star J.J. Watt proposed on Twitter that people in Texas pool their money to buy a controlling stake back.

The company has tried to assure customers everything will be OK.

“Texas, we don’t want you to be upset,” Whataburger wrote in an open letter on Twitter the day the sale was announced. “We will always be Texan and represent you in a way that makes you proud.”

The first Whataburger opened in August 1950 in Corpus Christi. There are now more than 800 locations in Texas and in other southern states.