The CDC on shared updated guidance on reopening schools in the middle of a pandemic, emphasizing mask-wearing and social distancing and saying vaccination of teachers is important but not a prerequisite.

WASHINGTON - The nation’s top public health agency on Friday provided a roadmap for reopening schools in the middle of a pandemic, emphasizing mask-wearing and social distancing and saying vaccination of teachers is important but not a prerequisite for reopening.

The Centers for Disease Control and Prevention announced the long-awaited update, but it cannot force schools to reopen, and agency officials were careful to say they are not calling for a mandate that all U.S. schools be reopened.

They said there is strong evidence now that in-person schooling can be done safely, especially at lower grade levels, and the guidance is targeted at schools that teach kindergarten up to 12th grade.

The agency also emphasized hand washing, disinfection of school facilities, diagnostic testing and contact tracing to find new infections and separate infected people from others in a school.

The guidance was issued as President Joe Biden faces increasing pressure to deliver on his promise to get the majority of schools back to in-person teaching by the end of his first 100 days in office. The White House said this week that a national strategy would be guided by science.

There’s wide agreement that learning in the classroom is more effective and that students can face isolation and learning setbacks at home. But teachers unions in some areas say schools have failed to make buildings safe enough to return. 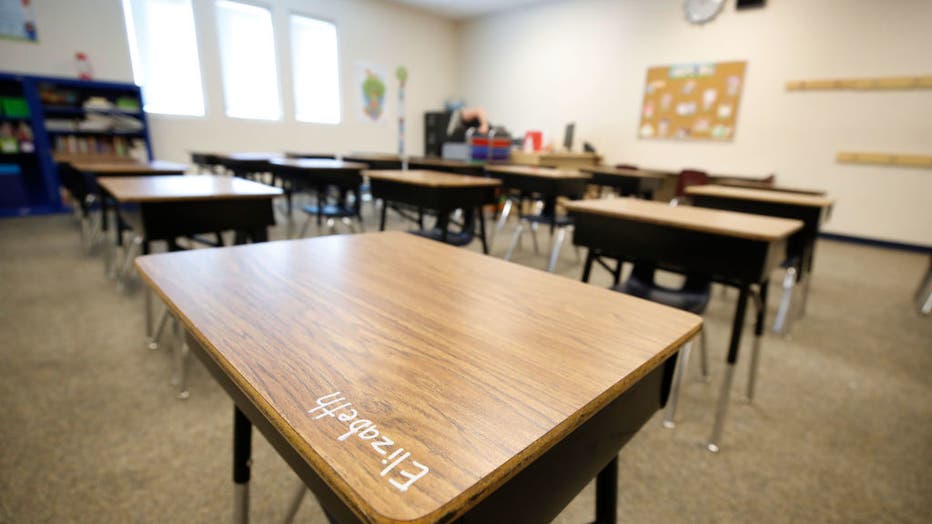 FILE - A student's name is written on a desk at Freedom Preparatory Academy on Aug. 13, 2020 in Provo, Utah. (Photo by George Frey/Getty Images)

CDC officials emphasized that in-person learning has not been identified as a substantial driver of coronavirus spread in U.S. communities, and that transmission among students is now considered relatively rare.

The CDC also stressed that the safest way to open schools is by making sure there is as little disease in a community as possible. The agency urged local officials to assess whether a bad outbreak is occurring in a community when making decisions about sending adults and children in to schools.

The guidance included a color-coded chart, from blue to red, on assessing community spread, including rates of new cases per 100,000 people and the percentage of positive tests.

That said, high community transmission does not necessarily mean schools cannot be open — especially those at the elementary level. If school mitigation measures are strictly followed, the risk of spread in the schools should still be low, the guidance suggests.

The document suggests that when things get risky, elementary schools can go hybrid, providing in-person instruction at least on some days, but that middle and high schools might go virtual.

Biden has been caught between competing interests as he works to get students in the classroom without spurning the powerful teachers unions that helped get him elected. Critics say he has bowed to unions instead of taking more aggressive action on reopening.

CDC director says schools can reopen without teachers getting vaccines

CDC Director Dr. Rochelle Walensky said that while teachers are in the category of essential workers under the agency's vaccination plans, getting the shot is not a prerequisite for the safe reopening of schools.

Unlike former President Donald Trump, who pressured schools to open and blasted the CDC for issuing guidance that he said was impractical, Biden has kept his distance from the CDC as it works on recommendations. Even after the CDC’s director recently said that vaccinations are not a prerequisite for reopening, the White House declined to take a firm stance on the question.

Getting students back in the classroom is seen as a key to getting parents back to work. As part of Biden’s coronavirus relief package, he’s calling for $130 billion to help schools update buildings, buy protective gear and enact other recommended safety measures.

Biden’s national strategy says the administration "will also work with states and local school districts to support screening testing in schools, including working with states to ensure an adequate supply of test kits."

But the CDC guidance stops short of recommending testing, saying "Some schools may also elect to use screening testing as a strategy to identify cases and prevent secondary transmission."

Existing CDC guidelines encourage a variety of measures to fight COVID-19 in schools, including the use of masks in certain settings, along with social distancing, hand washing and regular cleaning.

Some education leaders, however, said that CDC guidance provided under Trump did not go far enough and that information issued to schools was inconsistent. On masks, for example, it says face coverings are recommended if students cannot be spaced 6 feet apart, but with social distancing, it says masks "may be considered."

In the early days of the U.S. epidemic, some health experts worried that schools might become cauldrons of coronavirus infection, with kids infecting each other and then spreading it to family members — as seems to be the case during cold and flu season.

Those concerns were stoked by reports of an explosive outbreak in May at a high school in Israel, shortly after schools in that country reopened after a lockdown.

But with the economy reeling after lockdowns of schools and businesses last spring, the Trump administration pushed hard for schools to reopen.

In July, Trump accused the CDC of "asking schools to do very impractical things" in order to reopen. Education Secretary Betsy DeVos incorrectly said research showed there is no danger "in any way" if kids are in school, and Vice President Mike Pence promised that the CDC would issue new guidance.

The CDC did post revised documents late that month that kept many of its earlier recommendations. But in response to reporters’ questions, CDC officials said that the decision on whether to send kids back to school really rested with parents. The agency also posted an introductory document — written by government officials outside the CDC — that stressed the potential risks of children not attending school.