The tri-colored confection has been around for over 100 years.

You either love it or you hate it; there is no in-between.

Candy corn has been one of the most divisive candies in confectionery history but for many, the sweet and waxy treat signals the start of fall and most importantly, Halloween.

More than 35 million pounds of candy corn are produced every year, according to past reports from the National Confectionary Association (NCA), and while many a meme have been created joking about the best way to handle candy corn is by "throwing it in the garbage," people are still buying the dang stuff.

In fact, in 2019, Illinois-based candy company Brach's, which claims it produces approximately 7 billion pieces of candy corn every year and has 85% of the total share of the candy corn industry during Halloween, sold $73 million worth of candy corn that year.

So while many joke and quite possibly gag at the mere thought of candy corn, the longstanding Halloween sweets have a loyal and solid fan base.

Let’s take a look at the history of candy corn and how it became the unofficial Halloween candy. 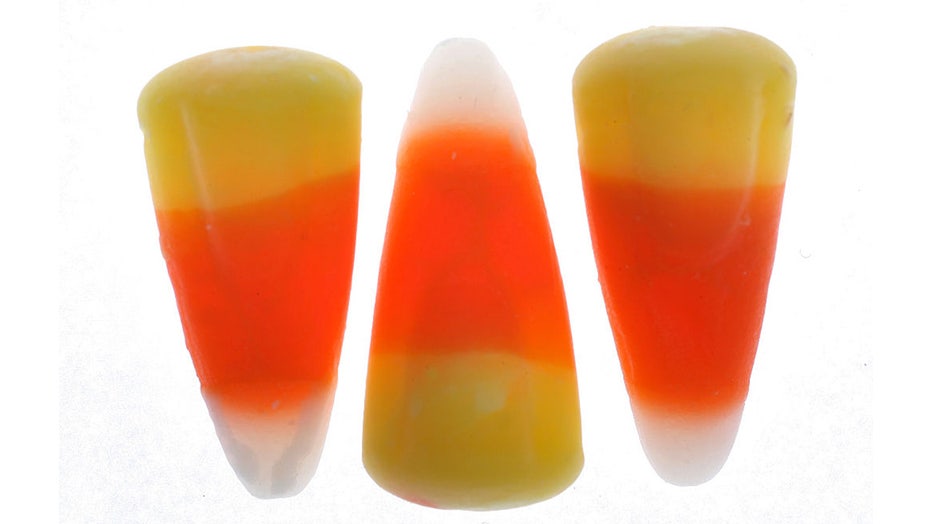 Where did candy corn come from?

Candy corn first emerged in the 1880s, but not as a delightfully whimsical Halloween treat.

The man dubbed the unofficial inventor of candy corn is George Renninger, an employee at Wunderle Candy Company in Philadelphia.

But soon, the Goelitz Candy Company—now the Jelly Belly Candy Company— picked up the candy corn recipe and popularized it, according to History.com.

Goelitz originally marketed candy corn as "Chicken Feed" since the candy resembled that of corn, according to National Geographic.

And instead of being advertised as a Halloween candy, it was intended to appeal more to farmers and as a treat to be enjoyed year-round.

It wasn’t until the 1950s, when Halloween became more synonymous with candy, did candy corn truly take off as a seasonal treat.

What is candy corn made of?

The process of making candy corn hasn’t changed much in its over 100-year history, according to the NCA.

When it was first mass-produced in the 1900s, many confectioners worked together to mix sugar, corn syrup, fondant, marshmallows, as well as other unknown ingredients and poured it into buckets.

The liquid candy would then be poured into corn starch trays imprinted with kernel-shaped molds and workers would have to pour each color into its respective spot in order to create the signature look of the tri-colored candy.

Now, most of the work is done by machines. But the process of making candy corn is essentially the same and the ingredients have evolved, somewhat.

Yes, candy corn does contain ingredients made from bugs. It contains confectioner's glaze, which is made from a bug secretion called lac-resin, according to USA Today. The secretion is what makes the candy's hard coating.

Candy corn also contains gelatin, which is usually made up of animal hides and bones, just like Jell-O.

Why do people hate candy corn?

Apart from the actual ingredients, which, by the way, aren’t as bad as maybe ingesting microplastics, many have issues with the taste.

In fact, this year, candy corn ranked No. 2 as the worst Halloween candy, falling behind circus peanuts, according to CandyStore.com.

"Yes, it's pretty much just sugar. Isn't that the point? Candy corn is nothing special. There are absolutely better candies out there. But if you can't enjoy stuffing handfuls of candy corn into your pie hole, well, I don't even know what to tell you. But clearly, I'm in the minority," the website reads.

According to a 2020 survey by the NCA, Gen X is the most likely to say they actually like candy corn at 58% and Gen Z followed close behind at 56%.

Many of the younger generations, however, would prefer to not partake.

Hot topic: There is a right and wrong way to eat candy corn

To add more division to this already-controversial candy, apparently there is a right and wrong way to eat candy corn.