A North Texas state representative is proposing what would be called Bo's Law.

DALLAS - A North Texas state representative is proposing what would be called Bo's Law.

It would clarify language surrounding the castle doctrine, which allows Texans to use deadly force when protecting their home.

The state representative’s office was the backdrop for the unveiling this legislative effort said to be about transparency and trust. The proposed Botham Jean Act.

“The question is, will we choose to protect and preserve the systems that harm and too often kill unarmed and sometimes handcuffed African American women and men?” State Rep. Carl Sherman (D-DeSoto) said.

The announcement of legislation in his memory targets key aspects associated with the Amber Guyger investigation. 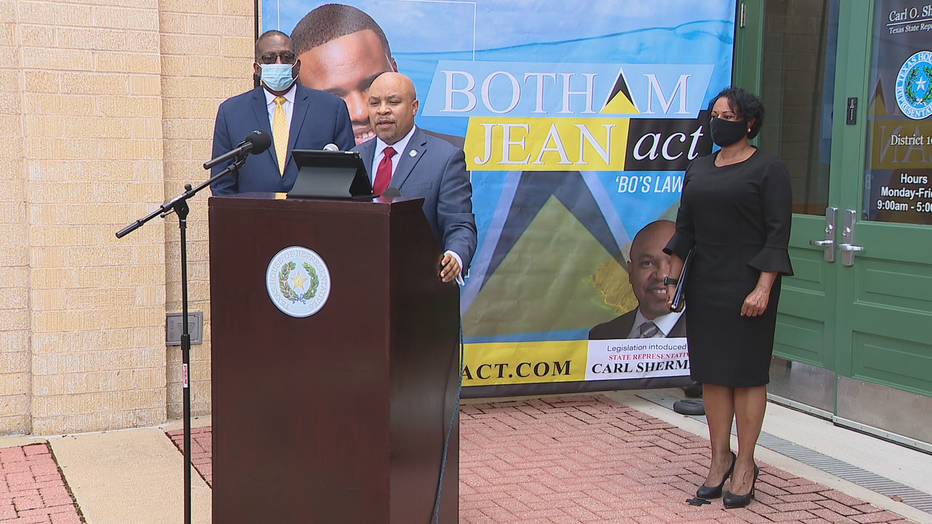 The former Dallas PD officer is now in prison for killing Jean.

“Why was an in-camera video in a police car where Amber Guyger was taken turned off? Does that happen in any other instance or any other person accused of a crime? No,” State Senator Royce West (D) said.

They said it will increase accountability among police and clarify language with what’s known as the state’s castle doctrine.

Guyger's attorneys defended her, unsuccessfully, by arguing that she thought she was protecting her own property after mistaking Jean's apartment for her own.

The state leaders want clarity in the law.

“The door must be closed on any attempt to include such an argument under the castle doctrine as a means to justify a killing just because you believed you were in your own home,” State Rep. Nicole Collier (D) said.

Its details have been laid out just days after Dallas city leaders put on hold an effort to rename a portion of Lamar Street in Jean’s memory.

“We love our noble peace officers and their lives matter, but I want to be clear, there are no blue lives. Noble police officers are black, white, and brown. This is right versus righteous. This is transparency versus unclear,” Sherman added.

Sherman will introduce Bo’s Law during the 87th Texas legislative session, which begins in January.