In the wake of this week's mass shooting at Ross Elementary School in Uvalde, Carter BloodCare is urging the public to give blood in support of the victims.

FRISCO, Texas - In the wake of this week's mass shooting at Ross Elementary School in Uvalde, Carter BloodCare is urging the public to give blood in support of the victims.

Carter BloodCare is part of an emergency consortium that responded, sending significant amounts of blood, mostly O-negative, which can be used universally to treat trauma patients.

"In our area, there are 800 patients a day that rely on blood transfusions. Those are all blood types. Platelets, those are always in high demand," said Veronica Moore, with Carter BloodCare.

The answered call to help victims in Uvalde came at a cost to North Texas right as we embark on a busy holiday weekend.

"It’s a little more urgent today, yes. Because that O-negative blood is in high demand. Cities at critical levels, we’ve seen it stay at critical levels throughout the pandemic, so we want to be prepared," Moore said.

"I do it regularly. There’s a reason I do it. I lost my wife a few years ago. She was a cancer patient," said Paul Gordon, who donates blood.

Gordon said people donating blood gave him more time with his wife before she passed away. He understands the need, just like Joe Wilkerson, who is a substitute teacher in Grapevine.

"With the news being what it is, especially in light of the events the past few days, maybe in some small way I can help somebody out," Wilkerson said. 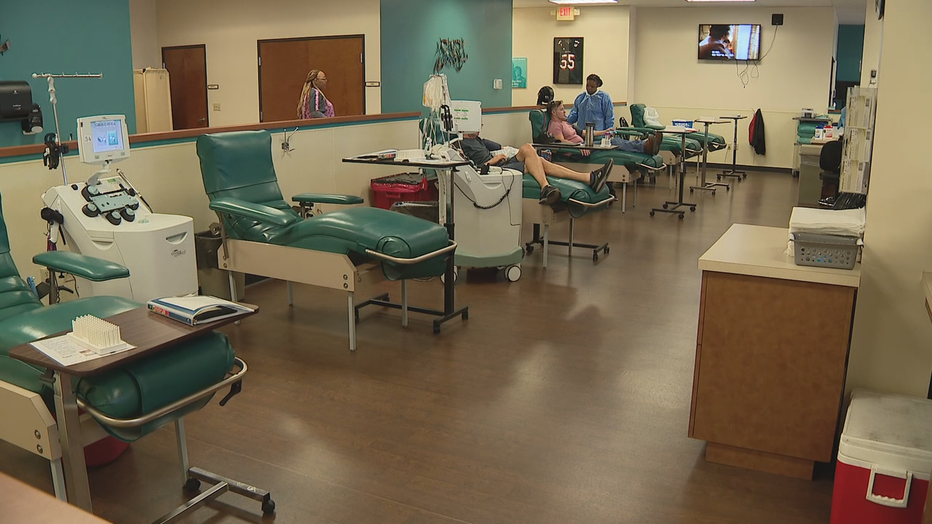 Carter BloodCare has 20 donation centers across the DFW Metroplex and is hosting pop up donation drives, like an event Friday in Frisco that was hosted by the RoughRiders.

"We urge everyone to come out, not just the O-negative donors, but everyone," Moore said.

"It’s not hard to do," Gordon added. "I know the value of the donations and it just feels good to get back."

"It’s just a small way to give back to the community," Wilkerson said.