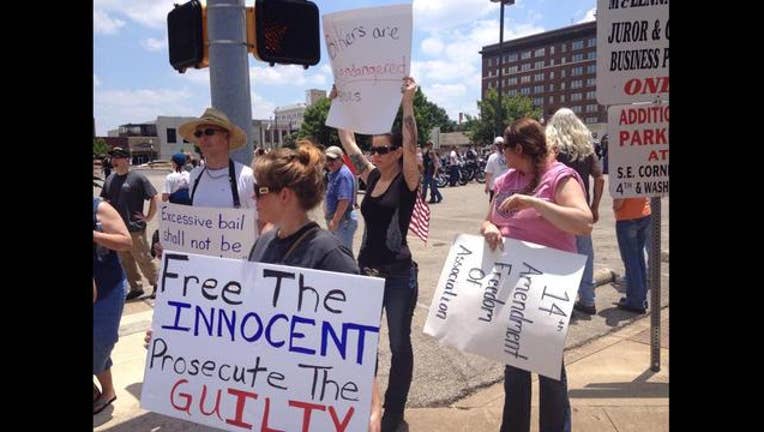 Several hundred bikers protested Sunday outside a courthouse in Waco over the continued jailing of more than 100 bikers, friends and family members three weeks after a deadly shootout at a restaurant.

Bikers proclaimed their constitutional rights and held signs outside the McLennan County courthouse. Before they parked in front of the court building, they circled the jail and detention center twice.

"We wanted to let the boys know we were here," Sons of Liberty motorcycle club member Mel Robins said. The protest was organized by the club's Dallas chapter.

The Confederation of Clubs and Independents urged members in an email to avoid the protest so as not to "exacerbate what is already a highly charged" situation. That group is the one that organized the May 17 meeting at a Waco Twin Peaks that ended in gunfire.

Nine people were killed and 18 injured.

It remains unclear exactly what triggered the gunfight. Waco police have said they returned fire after being shot at. They have declined to release detailed reports from that day, saying they are still awaiting ballistic reports.

Police have said 18 officers, four state troopers and more than 200 bikers were at the roadside restaurant at the time.

Adam Valdez, 66, defied the COC's request to steer clear of the demonstration, riding about 175 miles from Yoakum, Texas, to attend.

"`Bikers lives matter' may be a cliche but it's true," he said, referring to the words on a sign taped to the front of his motorcycle. "We're no different."