President-elect Joe Biden said that administering 100 million shots in his first 100 days is only the beginning of his coronavirus plan in remarks on Jan. 15, 2021 in Wilmington, Delaware.

President-elect Joe Biden has promised to get straight to work after he is sworn in as the 46th president of the United States on Wednesday, which could include swift action on federal guidance President Trump revoked that was designed to protect transgender students.

The Trump administration, early in its tenure, revoked an Obama-era federal rule that extended Title IX protections to transgender students, allowing them to use bathrooms and locker rooms according to their gender identities and not just their biological sex.

Biden has already begun to lay out his two-step plan to tackle the ongoing coronavirus crisis, and has promised to immediately undo several moves made by President Trump, including his decision to withdraw from the Paris Climate Accord.

Biden is prepared to sign nearly a dozen executive orders on his first day in the Oval Office, on issues ranging from the pandemic to a travel ban on predominantly Muslim countries.

But among the Trump actions Biden has promised to undo on his first day in office are federal guidelines for transgender students under Title IX. 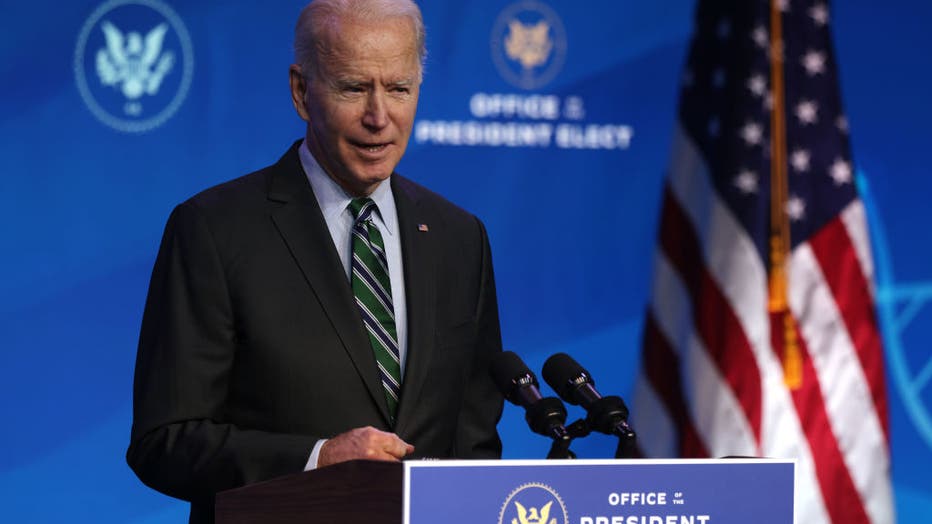 President-elect Joe Biden speaks during an announcement Jan. 16, 2021 at the Queen theater in Wilmington, Delaware. (Photo by Alex Wong/Getty Images)

Without these Title IX protections, it has been left to states to make their own rules on the issue.

The decision was considered a setback for transgender rights, though proponents argued the Obama rule was an example of federal overreach.

Biden’s website has a page dedicated to policies designed to support the LBGTQ+ community, and includes the promise to reinstate protections for transgender students on his first day in office.

"On his first day in office, Biden will reinstate the Obama-Biden guidance revoked by the Trump-Pence Administration, which will restore transgender students’ access to sports, bathrooms, and locker rooms in accordance with their gender identity," the website reads.

Some of the other policies he intends to promote and implement include protecting the LBGTQ+ community from violence, ensuring access to high-quality health care and ensuring fair treatment in the criminal justice system.

It is unclear whether Biden will be able to tackle all of these promised issues on his first day in office.

His focus could be turned initially to the coronavirus pandemic, as the U.S. death toll approached the 400,000 milestone.

A spokesperson for Biden’s team did not immediately return Fox News’ request for comment.