Running Again? President Biden thoughts on Trump and his future

President Biden seems like he wants to run again but doesn't want to commit fully to reelection plans.

WASHINGTON - After more than 60 days in the White House*,* President Joe Biden held his first news conference on Thursday — taking questions on a range of subjects from the East Room in a nationally televised event.

It shouldn’t come as a surprise the president used that national audience to tout his administration’s accomplishments over the previous two months, and Biden for the first time said he plans to run for reelection in four years.

"That is my expectation," Biden said while shying away from a concrete commitment to seek re-election.

He said Harris would remain on the ticket should he run again.

Despite inheriting the world’s most COVID-19 infections, deaths and hospitalizations, those numbers have drastically improved since he took office, thanks in large part to the vaccination effort. Before taking office, Biden vowed to have 100 million shots administered by the end of his first 100 days. That milestone was passed a week ago.

Now he’s aiming for 200 million shots administered before his first 100 days expire. "I believe we can do it," Biden proclaimed. 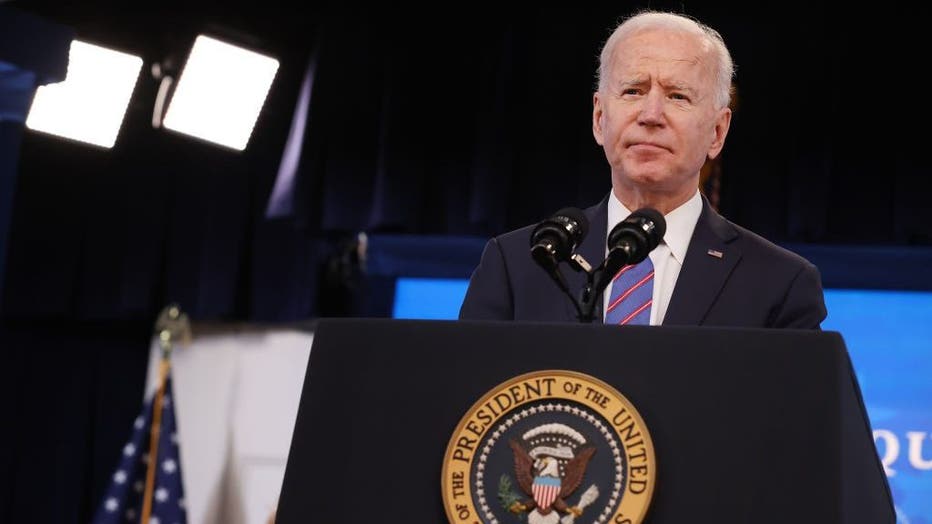 While seemingly ambitious, Biden’s vaccine goal amounts to a continuation of the existing pace of vaccinations through the end of next month. The U.S. is now averaging about 2.5 million doses per day and an even greater rate is possible.

Over the next month, two of the bottlenecks to getting Americans vaccinated are set to ease as the U.S. supply of vaccines is on track to increase and states lift eligibility requirements to get shots.

And he mentioned the latest jobs report, which shows a pandemic-low 684000 new unemployment claims in the last week. "That's the first time in a year the numbers have fallen below the pre-pandemic high," Biden said.

RELATED: Unemployment claims fall to 684,000, fewest since start of pandemic

Even so, when the floor opened up for questions, reporters quickly steered the news conference towards ongoing crises, like climate change, gun control and immigration.

Mass shootings have plunged the nation back into a debate over gun control.

On March 22, a gunman in Boulder, Colorado killed 10 people at a grocery store. And on March 17, a gunman killed eight people inside Atlanta-area spas, six of whom were Asian women.

The Atlanta shootings put a spotlight on the violence and hate speech the Asian-American community has endured, spiking last year with the onset of the pandemic.

Biden fielded several questions on an increasing number of migrants who are crossing the southern border, amplifying the Republican calls for a more strict border policy.

The president placed Vice President Kamala Harris in charge this week of the administration’s response to the border, where a humanitarian crisis is unfolding.

Biden says he’s flattered by the claim that immigrants are surging to the border because he is "a nice guy," but he dismissed it all the same. He said his administration is in contact with Mexico, trying to determine the number of people the U.S. would accept and how many Mexico would bring back.

The number of minors arriving at the border without parents has risen so much, neither Border Patrol nor Health and Human Services can house them all. Adult migrants and families trying to cross the border illegally has also surged, but the administration’s current policy is to send them back.

The president said his administration is accepting children traveling to the border alone, saying parents who send their children across the border alone are doing so in an act of desperation.

The administration is working to get beds and other facilities operating so the children being held by Border Patrol can be transferred, Biden said.

One reporter pointed to a facility in Donna, Texas with subpar conditions. She said it's at 1,556% capacity with children sleeping on floors, packed into pods.

Biden said those conditions are "totally unacceptable" and pledged to move 1,000 of those children to other facilities.

"That's why I got Fort Bliss opened up. That's why I've been working from the moment this started to happen to try to find additional access for children to be able to safely be housed," the president said.

He blamed a lot of the problems border officials are facing on Trump-era policies and said he makes no apology for ending them.

President Joe Biden said that he plans to run for reelection in 2024 when asked at his first news conference since becoming president. Biden took questions for just over an hour on the border crisis, foreign affairs, COVID-19 relief, among other topics.

Whether it’s immigration, gun laws, or protecting voting rights, Biden said it’s up to Republicans to work with him. But even if he doesn’t get their cooperation, he’s not ruling out support for changes to Senate procedures that would help him achieve those goals.

"Republicans are going to have to determine if we’re going to work together or the way in which they want to proceed is to divide the country, continue politics of division," Biden said.

Biden said the filibuster is being abused "in a gigantic way." He floated the idea of senators engaging in the old-fashioned filibuster, which would require them to stand on their feet for hours to object to Biden’s agenda.

But should gridlock persist, Biden hinted at — without committing to — abolishing the filibuster altogether.

"If there’s complete lockdown and chaos, as a consequence of the filibuster, then we’re going to have to go beyond what I’m talking about," Biden said.