After winning the Emmy for best actress in a limited series or movie for her work in 'Fosse/Verdon' Michelle Williams used her acceptance speech to urge respect for women.

NEW YORK (AP) - Michelle Williams said in her Emmy-winning speech that women need to be listened to and fairly compensated for their work.

"I see this an acknowledgement of what is possible when a woman is trusted to discern her own needs, feel safe enough to voice them and feel respected enough to be heard," she said on Sunday night.

Williams won the award for best actress in a limited series or movie for her work in "Fosse/Verdon." The eight-part FX series co-starred Sam Rockwell.

Bob Fosse was the exacting mind behind the angular movements and bowler hats of "Chicago," the brutally autobiographical "All That Jazz" and the dark punch of the film "Cabaret."

But Gwen Verdon, often overlooked, won four Tony Awards within six years in the 1950s. They were married in 1960 and separated in 1971 when Fosse's womanizing finally took its toll.

Williams credited FX and to Fox 21 Television Studios for showing her respect by giving her extra dance classes, voice lessons and better wigs and false teeth when she asked, regardless of cost. She also pointed out that she was paid as much as Rockwell. 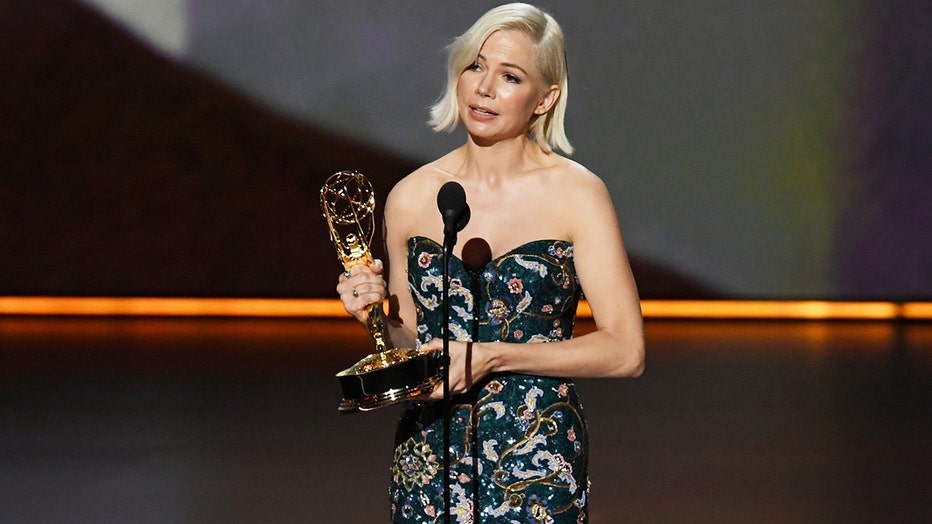 Williams infamously received just $1,000 to reshoot scenes from 2017's "All the Money in the World," while co-star Mark Wahlberg negotiated $1.5 million for the added scenes. Williams has said she felt paralyzed after learning of the disparity.

"The next time a woman — and especially a woman of color because she stands to make 52 cents on the dollar compared to her white male counterpart — tells you what she needs in order to do her job, listen to her. Believe her," Williams said Sunday.

"Because one day she might stand in front of you and say thank you for allowing her to succeed because of her workplace environment and not in spite of it."